Rated PG for peril/scary moments, rude material and some language. 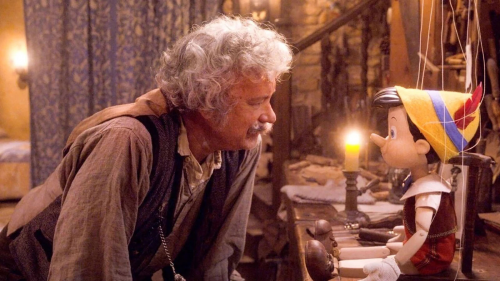 Director Robert Zemeckis has been missing his spark. After his stint through the Uncanny Valley — The Polar Express, Beowulf, A Christmas Carol — his return to live action has been nothing but rocky. But who better to have as the driving force behind Disney’s new Pinocchio — presented here as a mix of live-action and motion capture — than the man who gave us so many revered classics. And before you could call this another cash grab, just remember it’s premiering on Disney+ (so no one has to pay for it), and all it comes down to now is whether it’s worth your time. The short answer is absolutely.

You know the story: Jiminy Cricket (voiced by Joseph Gordon-Levitt) has arrived at the home/workshop of Gepetto (Tom Hanks sporting another goofy accent). Gepetto still mourns his wife and child, but has crafted a boy made of pine he names Pinocchio. That night, Gepetto makes a wish and the Blue Fairy (Cynthia Erivo) grants Pinocchio (voiced by Benjamin Evan Ainsworth) life. Well, almost. First, he has to prove himself brave, truthful, and unselfish, but not before Honest John (voiced by Keegan-Michael Key), Stromboli (Giuseppe Battiston), The Coachman (Luke Evans), and Monstro have their ways with him first.

As great as Pinocchio is, and with the Zemeckis magic returned, it’s still far from perfect. There is some questionable use of intellectual Disney property, and a few instances where the CGI starts to become more apparent due it being unnecessary. But that doesn’t mean any of it’s a dealbreaker. Things float along nicely, but thankfully not quite as shot-for-shot as The Lion King. The new songs aren’t a complete bother, even if they stick out from the classics we all know and love. Alan Silvestri echoes both his Back to the Future and Who Framed Roger Rabbit scores, but new Silvestri is always welcome on my Prime playlist.

The ending is a little altered from the original animated classic, but presents an even better message than it already had. Two new characters add a dash of levity, while Evans steals all of his scenes. And let’s just say that Zemeckis manages to crank Pleasure Island to 11. This Pinocchio may not be the definitive version of Carlo Collodi’s story, and it certainly won’t be the last — Guillermo del Toro has his version hitting Netflix in December. What it does manage to do is breathe some new life into the animated Disney classic.