Timon and Pumbaa once again steal the show in a visually jaw dropping, but ultimately heartless, retread. Made for those looking for a visual upgrade only.

Rated PG for sequences of violence and peril, and some thematic elements. 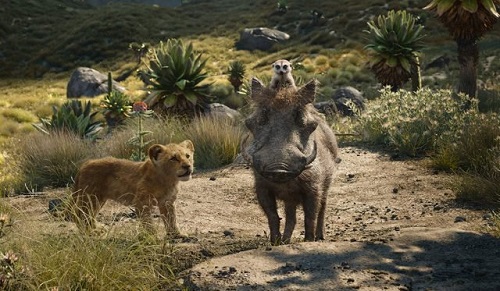 When it comes to Disney and their live action remakes, you’d think The (don’t call it live action) Lion King would reign supreme. Sadly, it’s almost as middling as the rest of them have been. While never succumbing to the same drivel as Maleficent or Dumbo, it still manages to fall flat in the long run. Not even the power of director Jon Favreau (Iron Man, Iron Man 2, The Jungle Book) can keep over-familiarity defeat the power of nostalgia. It doesn’t help that the first (almost) hour is more or less shot-for-shot and it’s not until Timon and Pumbaa (voiced by Billy Eichner and Seth Rogen) finally show up that the film finds its own flavor.

If any remake doesn’t need a synopsis, it’s The Lion King, but here we go. Young Simba (voiced by JD McCrary) leaves his pack behind after the death of his father, King Mufasa (voiced by James Earl Jones again) at the hands of Mufasa’s brother, Scar (voiced by Chiwetel Ejiofor). The circle of life comes around when Nala (voiced by Beyoncé) discovers Simba (voiced as an adult by Donald Glover) living hakuna matata in paradise with Timon and Pumbaa. But Simba must now come to terms with his destiny and return to the pride lands to save everyone from the tyranny of Scar’s dictatorship.

I suppose the biggest hurdle Favreau had to encounter is that The Lion King was an original property to begin with. When it came to The Jungle Book, he had the opportunity to pull from both the original animated classic and Rudyard Kipling’s extended bibliography. So while he may have a whole new set of tools to embrace technologically, that’s about all the effort that went into adapting this photorealistic reenactment. The Lion King’s heart just doesn’t seem to be in it anymore, but it’s not for lack of trying.

The voice cast do what they can with the material, but considering how much of Jeff Nathanson’s screenplay is verbatim, he barely deserves a screenwriting credit — except for the amount of riffing Eichner and Rogen did. Which brings us to the best part of the movie: them. Can we please just have a new “live action” Timon and Pumbaa movie, please? Not necessarily a remake of The Lion King 1 ½, but definitely a film of their own. The two are hilarious together and completely reinvigorate the characters, making them all their own, while staying true to the hilarious spirit of Nathan Lane and Ernie Sabella.

Unfortunately, the story plays beat-for-beat of the original. However, Favreau has come up with some spectacular imagery. With not one single shot of actual live action footage, it’s quite a technological achievement. But, that always comes with a detriment. The laughs may be in tow, but as I said, the heart is severely lacking. Try as he might, Favreau just can’t get the same emotion as Roger Allers and Rob Minkoff did with their hand-drawn animation. Thankfully, Elton John and Tim Rice’s classic songs remain intact, even if Ejiofor simply sing speaks his way through the now underwhelming “Be Prepared” — and Rogen can barely carry a tune, but doesn’t necessarily need to and it just makes his performance funnier.

While visually stunning, I suppose it is nice to have a new option when you’re in the mood for The Lion King. But when The Lion King can’t even be as much fun as Aladdin, there’s something rotten in the state of Disney. There’s also quite a few moments that come off rather dopey in “live action,” mainly Mufasa falling to his death. When it’s shown again later in the film it actually becomes unintentionally hilarious. For interested parties, sit back and wait for Timon and Pumbaa to come to the rescue. As for the rest of The Lion King, this is even more of a case of been-there-seen-that than before. It may not be the worst of the current remakes, but it should have been a crowning achievement and head of the pack.