When your wife says, "This movie is soo violent," there's your endorsement right there. Made for fans of 'John Wick' and escapist entertainment of the most violent kind.

Rated R for strong violence and bloody images, language throughout and brief drug use. 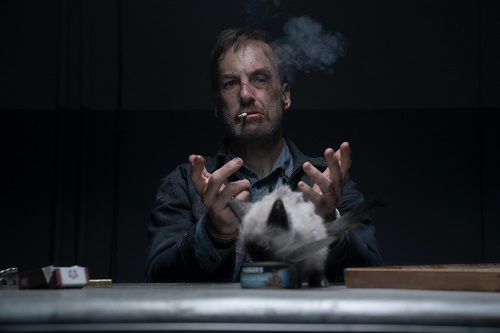 Whether it’s time or not, theaters are reopening and going to them is a personal choice — as it has been over the last year. Plenty of theaters — at least where I’m at — either did not close, or did so only for a short while. And I have friends/colleagues who have braved the pandemic to scratch their movie-going itch.

With choices being few and far between, studios look prepped and ready to start pumping out everything we’ve missed from delays. While Nobody may feel like an odd choice out of the gate, it’s also not a tentpole Universal might lose lots of money on. Coming from Derek Kolstad — the creator of the John Wick franchise — audiences should know what they’re getting into, welcomingly so!

Hutch Mansell (Bob Odenkirk) is in a rut. He works for his father-in-law, with big dreams to buy the company from him, just to have something he can call his own. His wife Becca (Connie Nielsen), has become distanced, his son Blake (Gage Munroe) looks down on him, leaving his daughter Abby (Paisley Cadorath) as his only ally. As luck would have it, fate comes knocking when a couple of burglars break in and Hutch doesn’t have the courage to “save the day.”

Now, everything has gone from bad to worse, until one fateful bus ride reactivates a side of Hutch lying dormant and he gets into a fisticuff with a bunch of thugs. Turns out, one thug happens to be Yulian’s (Aleksey Serebryakov) brother and now he wants revenge. What Yulian doesn’t know — or anyone else — is that you can’t judge this book by its cover, especially when the book is as lethal as Hutch used to be.

No one was clamoring for John Wick meets The Accountant, but maybe we should have. Highly choreographed action bursts combined with an ex-assassin of sorts, Hutch just can’t escape his past. Thankfully, Kolstad continues to grow as a storyteller and provides ample opportunity for Odenkirk to bounce freely from the everyday schlub to action star at the drop of a hat. As surprising as it may be to Odenkirk in a role like this, just wait till you see Christopher Lloyd as Hutch’s dad kicking ass and taking names. It’s been a long time since we’ve seen him this spry and it’s no surprise he steals every scene.

The setup may be a bit of a slow burn for some, but when you look back at the first John Wick, it was too. So while it may feel a bit by the numbers as far as plotting, the scant 92 minute runtime ensures the story never gets boring. Be advised there is a mid-credits scene. Kolstad also sets things up for possible further outings, something I would love to see. With Kolstad not being attached to the next two John Wicks, Nobody presents a whole new sandbox for him to play in. For those looking for a reason to finally head out to theaters again in search of that communal experience we hold so dear, Nobody is a great first step for those willing to take it.