One of the best action films ever, and one of the best sequels ever. Made for fans of the first film and anyone looking for a thrill ride with brains.

Rated R for strong violence throughout, some language and brief nudity. 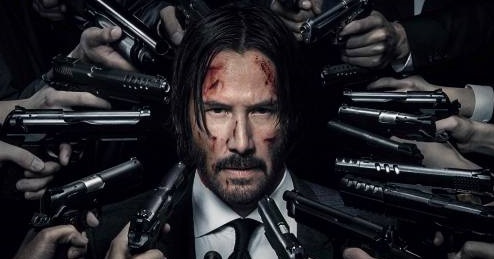 Hollywood makes ultraviolence look ultra-cool. R-rated action movies have always succeeded when it comes to bathing in excess, and right now, there’s honestly no action series cooler than John Wick. I missed the first film when it hit theaters back in 2014, but made sure to snatch up a review copy when it hit Blu-ray. That was a fantastic decision. Full of some of the best choreographed action in years, it was a complete surprise that blew me away. With the announcement of the sequel, I was giddy, yet cautious. We all know how easily sequels can screw up a franchise. It is with great honor to proclaim that John Wick: Chapter 2 does everything a good sequel is supposed to do — and then some.

Chapter 2 picks up with an astounding street chase between hitman Wick (Keanu Reeves) and a motorcycle. Turns out, our cyclist holds a key to gain entrance to kingpen Abram’s (Peter Stormare) — brother of Viggo from the first film — chop shop. Abram has Wick’s beloved Mustang and he wants it back. Wick returns home with his battered ride, when Santino D’Antonio (Riccardo Scamarcio) comes calling to collect on a debt. Wick owes him a favor and his peace and retirement are going to have to wait. After refusing, Santino blows up Wick’s house — this time the dog survives — and Wick is left with no choice but to return to his old ways for one last job. Santino wants him to kill his sister Gianna (Claudia Gerini), which winds up putting an open contract on Wick himself. Now, Wick must battle his way through anyone and everyone to take down Santino and save himself in the process.

The Raid 2 is the only sequel that comes close to a comparison of John Wick: Chapter 2. That film also took a simply structured first film and blows it up in the second.

The underground society Wick belongs to is made astonishingly real, with threats looming literally at every corner. Some awesome adversaries abound in the likes of Ruby Rose and Common, in particular, and we get an extended cameo by the original Django himself, Franco Nero! The violence is still every bit as choreographed — while over-the-top — as the first time, but there very well could be twice as many kills. The cast are all having a ball, especially Reeves who clearly relishes having a chance to shine again. The years have been hit-and-miss for him since The Matrix, but this is way more fun than even that first film. Speaking of The Matrix, it’s pure joy to see Reeves opposite Laurence Fishburne having a conversation on a rooftop. Chills!

John Wick: Chapter 2 is the wham bam thank you ma’am action film we’ve been waiting for. Fans of the first film will leave elated and begging for more. Especially with the film ending — mild spoiler alert — on a cliffhanger. Returning director Chad Stahelski and writer Derek Kolstad are having the time of their lives with these films and I can only imagine where they’ll take it from here. If they manage to one-up themselves yet again, the sky’s the limit and action fans will have a new classic trilogy — if they stop at three, which feels natural at this point. But if they keep making them like this, they can keep making them as long as they want. John Wick: Chapter 2 is the first great action film of the year, and I’m not mincing words when I say it’s going to take a lot to beat this one.