'Parabellum' raises the bar yet again with even more jaw-dropping action that the rest of the year will be hard-pressed to beat. Made for action fans and anyone looking to get their adrenaline pumping.

Rated R for pervasive strong violence, and some language. 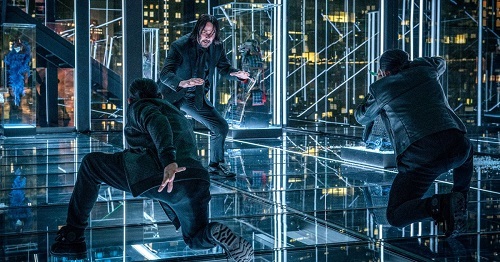 John Wick set a pretty high bar for action franchises. John Wick: Chapter 2 raised it even higher by not only besting the original, but by being one of the best action films ever. Now, it fills me with delight that John Wick: Chapter 3 – Parabellum surpassed all expectations. The law of diminishing returns need not apply to John Wick, because Parabellum is the best chapter yet.

Everyone wants to be wanted, but super-assassin John Wick is wanted with a $14 million Excommunicado bounty on his head. Picking up immediately where Chapter 2 left off, we find John on the run with everyone out to make good on the reward. Now, John has to rely on old friends (Halle Berry, Ian McShane, Laurence Fishburne, and Anjelica Huston) and cash in on even older promises if he wants to stay alive. A meeting with The Elder (Saïd Taghmaoui) will give John his penance and keep The Adjudicator (Asia Kate Dillon) from wiping out every ally he has.

Director Chad Stahelski has crafted astounding and jaw-dropping action sequences, pitting him alongside Quentin Tarantino and Gareth Evans. It’s a shame Joe Carnahan is behind the remake of Evans’s The Raid, not just because it doesn’t need to be remade, but if anyone could outdo the original, it’s Stahelski. This is some of the best filmed and choreographed action ever put on film.

Hyperbole, you say? Just you wait! See John Wick use everything from dogs, horses, books, motorcycles, knuckles, other people’s bodies, knives, and of course, guns, to save his ass as he works his way from one boss level to the next. It’s a feat unto itself for any sequel to even be as good as the original, let alone to continually get better with each entry. Typically by the third go-round the series has run its course.

Stahelski — along with his co-writers and stunt team — deliver in spades doing what every sequel should: broaden the franchise’s universe while upping the ante without jumping the shark. Something I would meet with ample glee in future installments. John Wick: Chapter 3 – Parabellum is pure adrenaline from start-to-finish and never lets up. Even during exposition there’s an urgency for Wick to make it to the end. By the time the credits roll your eyes won’t believe what they’ve seen.