While the story may be same old, it's filled to the brim with some of the best action put on film. Made for 'John Wick' and action fans in general.

Rated R for sequences of strong violence, language throughout, and sexuality/nudity. 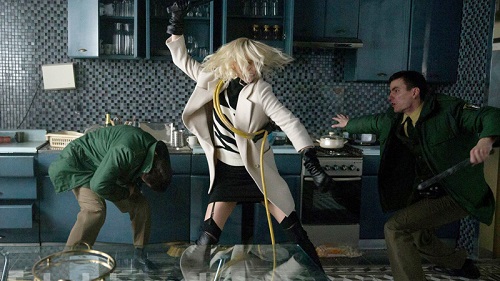 If there’s any actresses always proving how much of a badass she is, it’s Charlize Theron. While she’s always been one of Hollywood’s best assets, she really coming into her own after after stealing the show from Mad Max himself in Fury Road and taking on the lead protagonist in The Fate of the Furious earlier this year. But it’s with Atomic Blonde that she really comes into her own. Proving to be more than just a John Wick ripoff — comparisons abound with the film directed by one half of the first Wick’s directors, David Leitch — Atomic Blonde is the perfect action vehicle for Theron to kick ass and take names with the best of them.

In 1989 Berlin, James (Sam Hargrave), a spy, has just been tracked down and taken out by Yuri Bakhtin (Jóhannes Jóhannesson). Yuri takes a watch containing the tried and true spy film MacGuffin: a complete list of active agents. Ten days later, Lorraine Broughton (Theron), a British agent, is brought in for debriefing. Eric Gray (Toby Jones) and American Emmett Kurzfeld (John Goodman) want to know what happened to their informant Spyglass (Eddie Marsan), and try to find out who the double agent known as Satchel is. A series of flashbacks throw us into the middle of espionage and fisticuffs as Lorraine teams up with David Percival (James McAvoy) and Delphine Lasalle (Sofia Boutella) to keep themselves alive.

Leitch may have gone uncredited as co-director of the first John Wick, but every fight scene in Atomic Blonde prove he was every bit responsible as Chad Stahelski. While Stahelski went on to one up themselves with John Wick 2, Leitch gives us a fantastic display of what he’s capable of on his own. For anyone who doesn’t know, Leitch is currently hard at work finishing up directing Deadpool 2 and if he’s able to come even close to the amount of carnage on display here, we’re in for one wicked ride.

Fast-paced, hard-hitting, action-packed, and a sense of humor to boot, Atomic Blonde is everything action fans could dream of this summer. Theron gives one of her steamiest performances — it’s been said that she even did a lot of her own stunts. This shines through the most in a 10-minute single take showdown between Lorraine and a gaggle of killers that never lets up and is as breathtaking as it is brutal. This fight sequence is one for the books fitting right alongside any fight scene in either Raid films, the hallway scene from Netflix’s Daredevil, and the subway scene from Park Chan-wook’s Oldboy. It is phenomenal and a complete showstopper.

While it may run just a tad too long, some of the twists are more obvious than others. Leitch loves his Tarantino as much as the next — he even goes so far as to recreate an Inglourious Basterds scene complete with David Bowie’s “Cat People (Putting Out Fire)” — but it’s filled with jawdropping fight scenes, an asskicking performance from Theron, and one of the year’s best soundtracks. Atomic Blonde’s plot revolves around an “atomic bomb of information” and the film almost lives up to that. Pacing issues and length aside, this is one of the best action films of the year.