No Time to Die

Craig & Co. send Bond out in a grand finale that's bound to leave the most ardent fan shaken and stirred. Made for bond fans - especially those of us who love Craig's arc - and action fans who could be looking for a break from Marvel.

Rated PG-13 for sequences of violence and action, some disturbing images, brief strong language and some suggestive material. 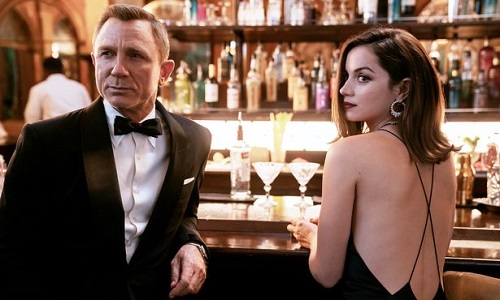 It’s been 15 years, four adventures, reshoots, rewrites, revolving directors, injuries, and a pandemic, but we finally have Daniel Craig’s farewell as the best Bond, James Bond, with No Time to Die. While everyone may run to Sean Connery as their favorite Bond, it’s probably out of nostalgia. Anyone who has ever actually read an Ian Fleming novel will know that Craig is a living embodiment of the classic character.

This may be Craig’s last outing, but it’s also a first for director Cary Fukunaga as the only American to ever helm a Bond feature. Considering Bond is an extremely British affair, it’s no surprise it took 59 years for anyone else to be given the chance and boy does Fukunaga deliver — and then some. Sending this part of the franchise out with a bang, this is also the most emotional Bond feature yet, and anyone who spoils the film should be shamed through the streets by Unella herself.

Bond (Craig) and Madeleine Swann (Léa Seydoux) are still together, with Bond having finally kept his word of leaving active MI6 service. But the past comes back to haunt both of them with Bond convinced Madeleine has double-crossed him forcing them to part ways. Felix Leiter (Jeffrey Wright) needs Bond’s help after Lyutsifer Safin (Rami Malek) has stolen a secret weapon from MI6 and threatens to turn it into a WMD. Now, Bond is in a race against time to stop Safin — with the help of fellow new Double O agents Paloma (Ana de Armas) and Nomi (Lashana Lynch) — who may know more about Bond’s past than he does and isn’t afraid to exploit it to execute his nefarious plans.

Since taking over the mantle with Casino Royale, it’s no surprise the final Craig installment shook up the Bond franchise. Craig has joked about his Bond being the “grumpy Bond,” but he’s just keeping the character grounded in the harsh reality of the kind of world he lives in. With a license to kill, what does that do to one’s psyche? There may not be any definitive answers, but at least it’s considered.

The Bond arc has become an ensemble piece. Each player is given significantly more to do through each installment. With the exception of Christoph Waltz’s Blofeld who isn’t given as much to do as the actor could, it’s nice to see Malek turn in a fantastically creepy villain performance. And the villains have more personal stakes in the story instead of being the kind of megalomaniacal characters Dr. Evil mocks.

Seydoux never gets to shine as bright as she can, but the rest of the women manage to kick things up a notch. Harris’s Moneypenny is always an emphatic delight, while Lynch and Armas get to not only steal the spotlight, but give a whole new meaning to the term “Bond Girl.” Everyone involved is kicking ass and taking names and they’re prepped and ready for more. Whether it’s spinoffs or not, producers Barbara Broccoli and Michael G. Wilson needs to at least keep them around for further exploits. Same with Whishaw’s “Q,” always so much fun when dire straits might call for some humor.

Director Fukunaga — along with stalwart Bond co-writers Neal Purvis and Robert Wade (franchise regulars since The World Is Not Enough) and Phoebe Waller-Bridge who was brought in to punch up the rewrites — ensure that all the Bond calling cards are on full display across No Time to Die’s 163 minutes. Car chases, explosions, huge set pieces, fisticuffs, dastardly villainy, twists, turns, and double-crosses, double entendres, global location hopping, and enough suaveness to keep the Craig finale fully shaken and stirred. Everything comes together to make this a Bond for the ages and send the arc out with the bang fans deserve.