A great will-they-get-away-with-it buried under all the quirks people complain about Wes Anderson overusing. Made for folks looking to turn their brain off and be entertained by Captain America cussing. 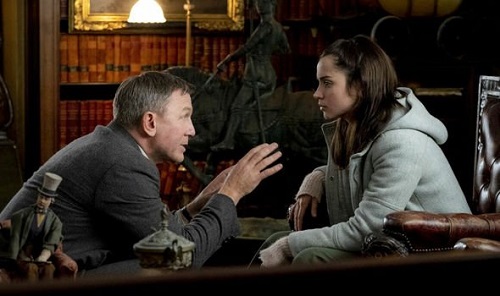 With as much shade was thrown at The Phantom Menace, at least it wasn’t released in the age of social media. Poor Rian Johnson was sent through the ringer over The Last Jedi, and while that may not be the best Star Wars, it’s far from the worst. The man deserved a break and what better way than to make a safe, fluffy film that’s as far removed from a galaxy far far away as he could get.

Knives Out is not Johnson’s best film. He’s never made a horrible film, but to make it clear, this is The Brothers Bloom Johnson, not Brick/Looper Johnson. It’s simply Agatha-Christie via Wes Anderson-lite, playing fast and loose with a decent story with no warmth, heart, surprises, or laughs. While it’s an interesting endeavor to be sure, it’s far from the masterpiece it’s being heralded as.

Crime novelist Harlan Thrombey (Christopher Plummer) is dead. The day after his 85th birthday no less. With his wealth up for grabs, of course everyone is suspect. Could it be his embezzling daughter-in-law Joni (Toni Collette)? Or Walt (Michael Shannon), his resentful son in charge of his publishing?

With a seemingly never-ending list of stars, you’d expect Knives Out to be a lot more fun. Or at least as much as Lionsgate’s marketing team is trying to prove. While I’m never afraid to be arbitrary, unfortunately, Knives Out is all quirk with no bite. Johnson ensures every cast member — aside from a small few — chews scenery to their heart’s content. At least they’re having fun, maybe for someone else it will be more infectious. With a two hour plus runtime, the shenanigans start to wear very thin by the 90-minute mark.

At least Plummer, Craig, and de Armas are consistently watchable. And the big twist isn’t saved for the end. So it turns the whole whodunnit aspect in a new direction and becomes more of a will-they-get-away-with-it? For anyone who enjoys a good battle of the classes with a heavy dose of entitlement run amok, Knives Out features a dysfunctional family who are at least more enjoyable than your own may be.

Just check expectations going in and you’ll probably enjoy it a lot more than I did. Maybe I’m getting a case of the year-end screening bah humbugs, but it takes a lot more to make me laugh than just Captain America cussing and an overlong film filled with just two hours worth of smirks.