Raya and the Last Dragon

Inclusive, action-packed, and full of heart. Made for families looking to wet their whistle with a new Disney classic.

Rated PG for some violence, action and thematic elements. 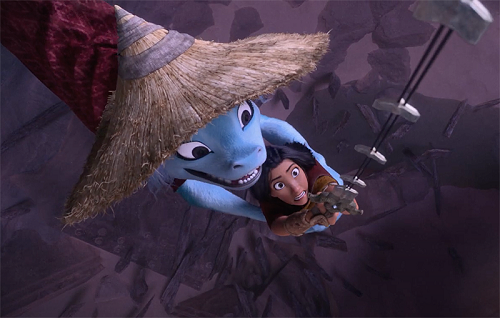 If life was “normal” and Raya and the Last Dragon was opening in theaters, I probably would have taken my daughter to see it — her first movie theater experience.  We watched the trailer during breakfast almost every day the last few months. Her anticipation was running high, only exacerbated by her already having Raya’s sword, a “Fold’n Roll Tuk Tuk” plush, and a 26-inch doll of Sisu herself. Raya may not be the best film the Mouse House has ever made, but it’s a huge win for inclusion and Disney Princess storytelling, while still being as hilarious, action-packed, and full of heart as we expect.

Five hundred years ago, humans and dragons lived harmoniously in the land of Kumandra. That is until monsters known as the Druun began their reign of terror, with the dragons sacrificing themselves to save humanity. Now, Kumandra is once again threatened by the Druun, and it’s up to Raya (voiced by Kelly Marie Tran) — along with her motley band of cohorts: trusty sidekick Tuk Tuk (voiced by Alan Tudyk), young Boun (voiced Izaac Wang), daring Tong (voiced by Benedict Wong), and Little Noi (voiced by Thalia Tran) — to find the titular last dragon, Sisu (voiced by Awkwafina), defeat the Druun once and for all, and reunite the kingdom.

The Southeast Asia setting already piqued my interest in Raya, and then directors Don Hall and Carlos Lopez Estrada — with co-directors Paul Briggs and John Ripa — went the extra mile to give us another Disney first: wuxia, a fictional genre of Chinese martial arts. As a longtime fan of the genre, I was extremely excited to see how they handled the action scenes and thankfully, they’re all very exciting and visually breathtaking. With characters worth rooting for, the plot never gets bogged down in any kind of unnecessary romances and sets Raya on a simple mission: save Kumandra and reunite the lands.

With all of the sad fanboy backlash Tran received over her role in Star Wars: The Last Jedi, it’s fun to see her make a fantastic comeback as the new Disney Princess. Awkwafina continues to bring the funny as Sisu with her expert brand of sarcasm and wit. And leave it to Tudyk to voice yet another animal sidekick. Families should be ecstatic to have an amazing option available at home and Raya and the Last Dragon is worth the $29.99 Disney+ Premium price — essentially the price of two adult tickets. For the more adventurous, it’s also opening in theaters, so the choice is yours. Either way, it’s the most fun you can have as a family right now, especially for anyone not wanting to wait until June when it will be available to all Disney+ subscribers.