A sports drama brimming with bland drama, but hardly any sports. Made for people who don't mind movies that pass by as slowly as nine innings.

Rated PG for mild language and some suggestive content. 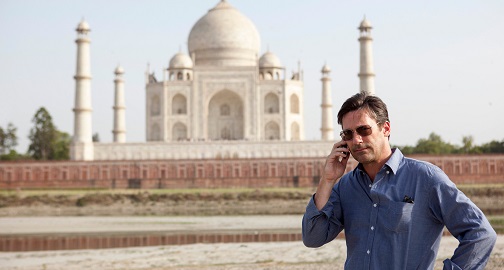 Sports dramas have never been my flavor of choice. Many of them are repetitive. Most of them are “based” on true stories. And they all have one of two unsurprising outcomes: the player, coach or team either succeeds or fails. Truthfully, the only unique thing about a sports movie is the scenario that the characters find themselves in. With movies like Moneyball, Field of Dreams and Warrior, those scenarios are fantastic – but lots of sports movies don’t achieve that level. Million Dollar Arm isn’t on the horrible end of the spectrum, but with a flat and predictable by-the-playbook story, it’s far from being on the great end either. It’s smack in the middle of the playing field. It’s like a game that ends with a tie.

Made by the studio that pumps out more sports dramas than most, Disney (although you wouldn’t guess from the several sexual jokes and bottles of alcohol consumed throughout Million Dollar Arm), you’d expect this PG family fare to be something upbeat and pleasant to bring the kids to. Au contraire, it’s void of fun kid characters (like those in The Mighty Ducks movies), it moves at a snails pace, it’s somewhat dark/unpleasant and, clocking just over two hours, wasn’t edited enough.

Imagine a profanity-free sequel of Jerry Maguire that follows up on the sports agent central character years later as his career and firm are on the brink of failure. With nothing left to lose, he (Jon Hamm) decides to take one last big risk to keep himself, his partner and their business afloat: host a year-long reality show-like contest in India for cricket players with the goal of teaching them to pitching baseball and ultimately land a tryout in front of Major League Baseball scouts. Show me the rupees!

Million Dollar Arm plods around following Hamm’s bland character as he tries to do his job. He kicks off the movie with allusions to his character being a philandering playboy, but because it’s rated PG, that never really comes across. We’re also told that he’s selfish, but that feel only comes through in the middle part of the movie – and it’s about as subtle as a fastball to the face. And, like every Disney movie, we watch as he generically tries to come around. He and co-stars Bill Paxton and Alan Arkin are never given anything impressive to do on-screen, but romantic interest Lake Bell and Indian contestants Suraj Sharma (the lead from Life of Pi) and Madhur Mittal (the brother in Slumdog Millionaire) are a missed opportunity. Whenever Bell is on-screen, she immediately pulls you in. She steals every scene. As for Sharma and Mittal, their underutilized characters are given the tiniest amounts of back story when they’re first introduced, but what we get of them is so culturally interesting and grounded in reality that Million Dollar Arm should have been told from their perspectives. The story of poverty-stricken kids from a third-world country who are stripped from their families and thrust into American hustle-and-bustle and strict physical training is much more interesting that of a once-wealthy man on the brink of failure trying to become rich again.

If you’re a fan of Disney’s other mild adult sports dramas (in the sense that they’re not kid-based comedies) like The Rookie, Secretariat or Invincible, then you’ll enjoy Million Dollar Arm. But if you found those ones dry (like I did) and want something more than the standard cookie-cutter baseball movie, then sit this inning out.