A long-faced horse-centered historical drama that is dreadfully boring up until its ending, the only part that is of historical recognition. Made for people who like horses and the boring Disney films of the '70s. 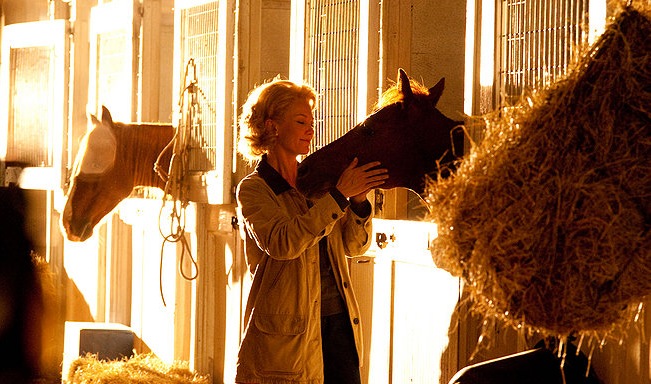 Despite being a PG Disney flick with a horse, Secretariat is not one you want to bring your kids to. It is a slow-moving two hours long, the horses rarely race and never talk (even though there are two laughably bad scenes where horses stare each other down). Being based on a fairly well-known true story, it is hard to talk about Secretariat without giving away spoilers – especially when the ending is what sets the story apart.

In 1969, Penny Chenery (Diane Lane, The Perfect Storm) and her brother were forced to leave their families for a season to take over the family farm in Virginia. While her accountant brother managed the account, she saw to the horse business – something that she obsessed about in her youth. Instead of simply selling them all off, Penny saw potential in one specific horse named Big Red (also known as Secretariat on the racetrack). So she left her husband and children in Denver to raise a racing horse.

To prep Big Red for his racing days, she kept the farm’s gentle caretaker, fired the dishonest trainer and went on the search for a new one. With recommendation from a trustworthy family friend, Penny brought Lucien Lauren (John Malkovich, Red) out of retirement for the job. With his knowledge and experience and her confident ego and unconditional love for Big Red, the three of them made history. SPOILER: The only reason this story is known is because Big Red went on to be the first Triple Crown winner in 25 years. END SPOILER

The smartest thing Secretariat does is to early on spell out horse breeding for those who know nothing about it, much like and educational “Horses For Dummies” video. From them on, the movie is all horse analogies. The worst thing about Secretariat are Lane’s distractingly terrible blue contacts. You will think they were pulled out of Maria Bello’s eyes from World Trade Center and slapped right into Lane’s.

Secretariat is trying hard to be this year’s The Blind Side – only it completely fails to achieve that same level of sappy, manipulative emotion, (thank heaven). But just as Sandra Bullock won an Oscar for The Blind Side (mind you I did not say she “earned” it), it is obvious that Lane is going for one here too.

Secretariat feels like one of the forgettably stagnant Disney films of the ’70s. In reality, the only audience I can see truly loving Secretariat is a horse-loving one. Despite looking boring, Seabiscuit actually ended up being a history horse drama that was entertaining, interesting and intense. Unfortunately, Secretariat has none of that going for it.