Although mildly formulaic and predictable, 'McFarland, USA' succeeds because of its emphasis on the characters and culture over sport. Made for fans of clean, fun, inspiring and interesting character-driven sports dramas.

Rated PG for thematic material, some violence and language. 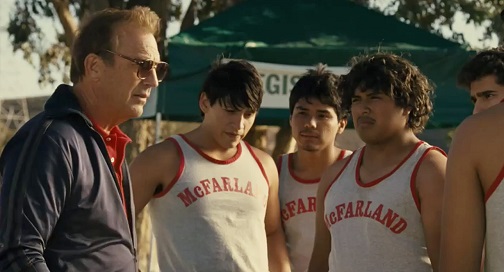 I’ve said it here many times and I’ll say it again: most sports movies are lame. Why? Because they all follow the same formula, the same sets of cliches. And there can only be two outcomes – either they win, or they lose. Having said that, I’ve praised a few sports movies (see my review of Warrior). What makes the good ones good? They focused on more than just the sport. They focus on the characters, real life. And just like those that I’ve given positive reviews in the past, McFarland, USA tells a genuine personal tale of real people who just-so-happened to play sports.

Based on the true story of the McFarland, CA high school cross country team, Kevin Costner leads the movie as coach Jim White. Previously an up-and-coming high school football coach, after a fiery outburst cost him his job and reputation, White takes his family to the only high school program that will hire him. McFarland is a small city that’s surrounded by central California’s agricultural area. The majority of its citizens are Mexican-American immigrants who work as “pickers” in the outlying farms. There’s little hope for the citizens within McFarland, as most are expected to remain there doing the same thing that they’ve been doing all along – picking.

White – or, as the Spanish-speaking students come to know him, “Blanco” – immediately realizes that he’s going to have a hard time in McFarland. Not only are the kids not motivated to do sports, but they’re flat-out unable to. Most of them wake up before dawn so they can work in the fields with their fathers prior to school, then they head back out to the fields immediately after school. It’s when White sees the physical strength and endurance of these kids that he makes a drastic decision to try something new – cross country.

Although McFarland, USA is undeniably a sports movie, it’s also equally – if not more – about the characters and their culture. We get to know White, his wife and two kids. We get to know five of the team’s seven members and their families very well. We also get to know several of the key members in their community. Beneath the facade of this cross country movie is a story of hard-working people, families and Mexican-American culture. Knowing the culture very well, the way it’s portrayed is genuine and extremely likeable.

This amount of development is worlds better than what most sports movies offer. If you’ll think back to last year’s Million Dollar Arm, Disney gave us a true story sports movie about a rich guy doing whatever it took to stay rich. It didn’t focus on the Indian kids who left their families and continent for a chance at Major League Baseball. It focused on the wrong characters. Fortunately, McFarland, USA gets it right. It’s not only everything that a sports movie should be, it’s so much more.