Yes - it's more entertaining than the real NFL draft. Made for sports fans who actually watch the NFL draft, as well as those who enjoy a decent occasionally comical sports drama. 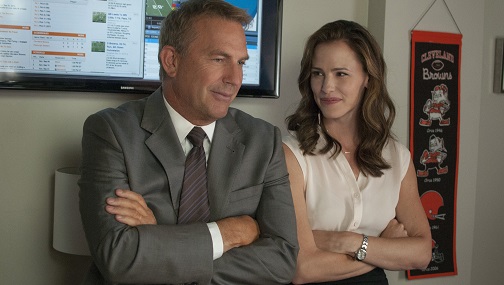 I give this disclaimer every time that I review a sports movie: I’m not a sports fan and I typically don’t care about most sports movies. Having said that, you might be surprised to hear that I didn’t mind sitting through Draft Day. While it’s not as engaging as the character-driven sports movies that I love – Warrior and Moneyball, for example – it was good enough to keep me entertained for 109 minutes.

Kevin Costner stars as the General Manager of a not-so-hot NFL team. With fan loyalty faltering, the legacy of the team is at risk – a legacy that his late father created. Now, on the day that the NFL draft officially kicks off, he’s taking risks that are not only testing his integrity, but also the faith of his family, his girlfriend, his boss, his colleagues, the team, the fans and the entire sporting community. Will he be able to swim out of the hot water that he’s placed himself in, or will it burn him and everything he loves?

While I’m certain that the only moviegoers who will absolutely love Draft Day are those football die-hards who actually watch the NFL draft, you need not be an avid football watcher to at least enjoy it. The strongest aspect of Draft Day is the entangling tension that it builds. So many stories, characters and actions are interwoven that it becomes intense as you try to figure out if/how this (occasionally) seemingly dumb character will pull this off. Because of that complexity and tension, the climax and outcome are unpredictable – which is something that I definitely did not expect from Draft Day.