Do-not-miss entertainment of the highest order. You owe it to your eyeballs to see this film. Made for 'Mad Max' fans and anyone looking for spectacle that doesn't bore.

Rated R for intense sequences of violence throughout, and for disturbing images. 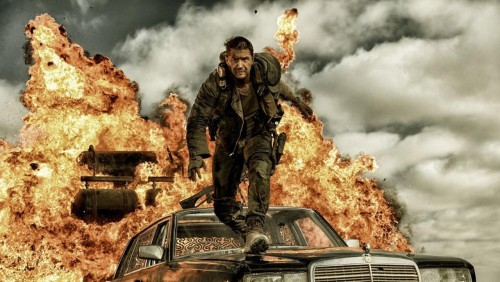 It’s hard to believe it’s been 30 years since Mad Max Beyond Thunderdome hit theaters. Since then, co-writer/director George Miller has made some, well, interesting choices. The Witches of Eastwick is a wickedly hilarious good time and Lorenzo’s Oil maintains its critically acclaimed status, but then there are Babe: Pig in the City, Happy Feet and the even worse Happy Feet Two.

To say family films are not his forte is an understatement. Something he proves beyond a shadow of a doubt with the return of our beloved Max Rockatansky. While it may not feature the man who made the character we all know and love — Mel Gibson — Tom Hardy steps in to fill some mighty big shoes and thankfully, Miller delivers the year’s biggest and most badass film of the year.

While never specifying its place within the Mad Max timeline, we meet up with our beloved anti-hero Max, still living the life of solitude in a dystopian future, before being captured by the War Boys and taken to the Citadel. Imprisoned, branded, and designated as a universal blood donor, he’s kept in a cage to help the wounded heal.

Little does Max know he’s about to be pulled into the middle of a war by Furiosa (Charlize Theron), who takes off with leader Joe’s (Hugh Keays-Byrne) harem of wives, including the pregnant Splendid Angharad (Rosie Huntington-Whiteley). Now, a fight to death erupts across the Australian wastelands with Max stuck in the middle, trying to help Furiosa get everyone to the mystic “Green Place.”

A lot of films recently have seen sequels arrive decades later DOA. Mad Max: Fury Road is absolutely the exception. While we don’t get to see Gibson return to the role, Hardy makes the best of the situation. Last weekend my wife and I watched The Road Warrior to introduce her to the insanity of Miller’s dystopian wasteland, and there is the slightest resemblance between Hardy and the then-24-year-old Gibson.

Oddly enough, Max is almost a secondary character in his own movie. While the most hard-pressed fans may cry fowl, it’s a good idea to surround him with new characters to reintroduce him to a younger crowd. Theron, and the bevy of nubiles — Huntington-Whiteley, Abbey Lee, Courtney Eaton, Zoë (daughter of Lenny) Kravitz, and Riley (granddaughter of Elvis Presley) Keough — hold their own against the motley crew of crazed madmen.

The best part of Fury Road, however, is Miller’s insistence on using practical effects. He delivers action sequences that are hair-raising, nail-biting, and forget-to-breath intense. This is the highest octane thrill ride of the year so far. Furious 7 may have kicked off summer with a bang, but this is the real deal, no overreliance on CGI here. It’s gonna be tough for the rest of summer to play catch up with the insanity Miller has unleashed. The only thing left to really say about Mad Max: Fury Road is it’s do-not-miss entertainment of the highest order. You owe it to your eyeballs to see this film.