With great performances and fantastic directing, 'Fury' will place you into a wartime setting that you haven't yet experienced - and I definitely recommending catching it on the big screen. Made for fans of good war dramas that offer a glimpse into the warfare that most of us will never experience.

Rated R for strong sequences of war violence, some grisly images, and language throughout. 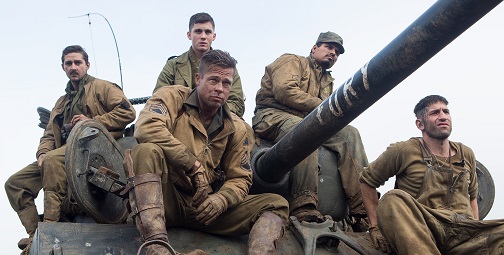 There are many war-based movies out there. For me, there are criteria that one must meet in order to get my stamp of approval. One of the most important is the ability to successfully make you experience a part of war that you wouldn’t know if you’ve never experienced it – and Fury absolutely nails that attribute.

Brad Pitt (Inglourious Basterds) returns to the European theater of World War II as the captain of a five-man tank outfit. The film opens just after the crew loses a man in battle. Upon returning to the forward operating base, they are assigned a new fifth man that’s straight out of boot camp (Logan Lerman, Noah). With no experience nor tank-specific training, under the brutal teachings of his captain and crewmates, he’s forced into the hellish nightmare of wartime in a Sherman tank.

Think back to the opening scene of Saving Private Ryan when we experience the storming of Normandy. Over the course of that un-rushed sequence, we are able to personally understand what D-Day might have been like. It was harrowing and 100 percent effective. Although Fury doesn’t re-enact any grandiose historically accurate battles like that, it still effectively gives us a taste of what tank warfare must feel like. From the perspective of a tank crew, with bullets and anti-tank munitions whizzing at the audience, I found myself flinching to escape the barrage. Warranting that reaction, Fury absolutely works.

On top of its terrifying style, Fury also benefits from a great cast playing excellent characters. Pitt is the tough-loving leader. Lerman is the broken newbie. Michael Peña (Crash) is the tough Latino with sass and nothing to lose. Shia LeBeaouf (Transformers) is a God-fearing Bible-quoter. And Jon Bernthal (The Walking Dead) is the unpredictable wild card. Because these five characters are so well defined, they make the moments of war worth caring about.

The only fault with Fury is the mid-movie pacing. There’s a very long completely character-based scene in the middle of the movie. Like Apocalypse Now, it attempts to show how broken and unstable soldiers become during war. While I enjoyed this segment, it brings the movie’s pace to an abrupt halt. Everything before it and after it is solid, but that part is a slow distraction. Aside from that, Fury is victorious.

If you can handle a gritty, realistic movie, then don’t skip Fury. It will allow you to catch a glimpse of what World War II tank warfare must have been like.