A must-see adults-only superhero flick that does exactly what its name entails. Made for fans of fun, gritty comic books, strong story-driven dramas and intense, ultraviolent action-packed films.

Rated R for strong brutal violence throughout, pervasive language, sexual content, nudity and some drug use - some involving children. 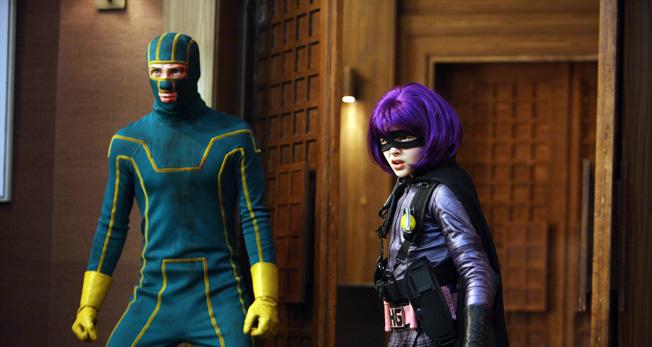 Prior to seeing Kick-Ass, my only desire for seeing it derived from me wanting to see how miserably it failed. The trailers and TV spots made it look like a bunch of potty-mouth teenage wannabe crime fighters prancing around in poor costumes. Fortunately, I was wrong. Except for the potty-mouth part.

Although Kick-Ass stars a bunch of kids, it is far from being a film made for kids. Full of vulgar profanity and graphic violence, Kick-Ass is for adult’s eyes and ears only. And like most good grown-up films, it’s got several somewhat-complex storylines that intertwine.

Dave Lizewski (Aaron Johnson, The Greatest) is your average nerdy teenage comic book reader – no social skills, dorky friends and constantly daydreaming. His awkward charisma and lack of self-esteem give him the superpower of being invisible to girls.

Living in New York City and witnessing evil and violence firsthand, Dave begins wondering why nobody has truly tried being a superhero – not one with special powers, but one like Bruce Wayne, relying on strength, weapons and technology – for the good of others. After being mugged one-too-many times, Dave decides he must give it a shot. He orders a unique wetsuit with a matching mask, wrangles up a few durable batons and begins training, learning his strengths and limits. His superhero name is Kick-Ass.

The first few times Kick-Ass fights crime, he gets it handed to him. Lucky for him, the first time that he ends up saving a life and making a difference, a dozen tech-savvy teens capture the footage and post it online, quickly making national news. With a masked crime-fighter gaining notoriety, the local bad guys become worried.

Meanwhile, in another part of town, a paranoid father (Nicholas Cage, National Treasure) with the taste of vengeance in his mouth trains his tough 11-year-old daughter (Chloe Moretz, (500) Days Of Summer) to deal with any violent attack. With Kick-Ass showing that costume-wearing crime fighting is possible, they decide to bear costumes of their own, becoming the deadly daddy-daughter duo Hit Girl and Big Daddy.

As Hit Girl and Big Daddy head out on their bloody road to revenge, they cross paths with Kick-Ass and get caught up in a joint battle against the same villainous crime boss (Mark Strong, Sherlock Holmes).

I never thought I’d be saying this about Kick-Ass, but it is an extremely well rounded, well-crafted film. It is full of laughs, surprises, action, violence, drama and even a little heart and romance. You are guaranteed to get entirely caught-up, engulfed and emotionally wrapped up within it.

As great as the fantastically campy performances are from Cage and Strong, the relatively unknown actors deserve the cheers for this film. Johnson adds the reality to the film through his character Kick-Ass, showing us that sometimes when we have good intentions, we get caught up in something that we simply aren’t fit for. He is easy to connect with, as you will see a little bit of yourself in him.

And who expected to be rooting so much for an 11-year-old girl superhero! Moretz is absolutely perfect as Hit Girl. In fact, she is such a scene-stealer that a better title for the film could be Hit Girl. She conquers both the action and emotional sequences.

The actor that could have given a stronger performance is Christopher Mintz-Plasse (Role Models). Instead of adding the great cast, Mintz-Plasse just “McLovin’s” his way through the role, never really contributing to the well-built characters. His efforts come across as mediocre at best.

The filmmaking aspect of Kick-Ass is just as spectacularly strong as the story and characters. Director Matthew Vaughn (Stardust, Layer Cake) perfectly stylized and crafted every shot of the film – it looks so cool. While the first third of the film should feel slow and bogged down with character and story development, it is not. The comedy and editing make it flow smoothly. And the action and story progression in the other two-thirds make the rest of the film fly. 117 minutes never went by so quickly. But if Mintz-Plasse is the sore thumb of the cast, the music is the sore thumb of Kick-Ass’ filmmaking.

Throughout the majority of the Kick-Ass there is music. Even though it recycles memorable themes from Danny Boyle’s films 28 Days Later and Sunshine, most of the time the music is fitting – enhancing the mood, tone and emotion of the film. But a few times it becomes any annoying distraction. When Dave first tries on his Kick-Ass costume, the poor Billy Madison-esque music selected for that scene feels as if it was only used to fill a gap of silence. At least those poor music selections only occur a few times throughout the film.

The mass amounts of good completely make up for the few negatives. If you are an adult who can handle R-rated films, then Kick-Ass is a must-see. Being a previous Kick-Ass naysayer, know that no matter what your opinion is of Kick-Ass, you are probably wrong. Kick-Ass is a film that unexpectedly lives up to its name and is 100% entertaining.