While it never hits the creative heights of the original, there's still tons of fun left in our ragtag group of spies. Made for fans of the first film and those looking to have some fun in theaters again.

Rated R for sequences of strong violence, drug content, language throughout and some sexual material. 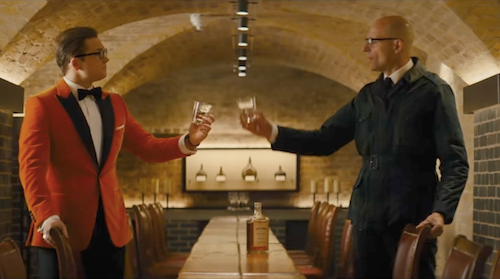 Matthew Vaughn’s Kingsman: The Secret Service was a huge breath of fresh air for the spy genre. Which says a lot in a year that had a pretty good run for spy films. From Kingsman to Spy to Spectre, 2015 was a lot of fun. So, how does Vaughn’s sequel The Golden Circle stack up? While it may still be every bit as fun as the first, it does have a tendency to get caught up in some instances of sequelitis. With co-writer Jane Goldman returning — along with the main cast who didn’t die in the first one — The Golden Circle returns our beloved Kingsman to the big screen with gusto. Hopefully, with Vaughn’s announced trilogy — and spinoffs — we can let this one’s shortcomings slide as a case of middle-child syndrome.

Eggsy (Taron Egerton) is loving his life as a Kingsman. Saving the day suits him far better than trying to rue the day, even if he’s still trying to get over the death of his mentor Harry Hart (Colin Firth). After a run in with Kingsman-reject Charlie (Edward Holcroft) and his new robo-arm, Eggsy is trying to do the one thing Harry never could: have a relationship with Princess Tilde (Hanna Alstrom). Soon enough, Poppy (Julianne Moore), a maniacal drug cartel entrepreneur — the titular “Golden Circle” — blows up Eggsy’s flat, along with the Kingsman compound.

Eggsy and Merlin (Mark Strong) are all that’s left and initiate the Doomsday Protocol, taking them to Kentucky, where they meet their cousin affiliates, the Statesman. Now, Eggsy and Merlin must get over some heavy trust issues and join forces with their new partners — Tequila (Channing Tatum), Ginger (Halle Berry), Whiskey (Pedro Pascal), and their leader, Champ (Jeff Bridges) — to save the world again after Poppy uses her drug running to kidnap Elton John (hilariously playing himself) and prepares to unleash her “Blue Rash” toxin across the world. Something the President of the United States (Bruce Greenwood) plans to use in his own personal war on drugs to wipe out the “criminal” population of the world.

If there’s one thing Vaughn revels in, it’s aspiration. Poppy may sound like just another villain, but Moore relishes playing against type as the antagonist. She brings a glee to Poppy’s plotting that keeps her just this side of unhinged, making her a pretty scary foil. In an early scene, we find out that to enter Poppy’s golden circle of trust, she makes new recruit Angel (Tom Benedict Knight) kill another member and eat him as a big juicy burger.

If there’s one thing Vaughn needed, it’s an editor. Clocking in at whopping 141 minutes, the film can barely sustain the runtime. A few snips could have slimmed down the shenanigans — as fun as they are — to make the film even faster paced than it is. It also suffers from Lord of the Rings syndrome with plenty of false endings and too many climaxes. Just when you think the movie is reaching the end credits it takes off on another denouement. But it’s all in good fun mind you. The cast are all perfect, even if Tatum exercises his use as yet another episode of stunt casting. Hateful Eight anyone? And Berry never gets a chance to step up and earn her rightful place amongst her fellow Statesman. Something even more glaring considering poor Roxy (Sophie Cookson) gets taken out in the Kingsman estate explosion.

However, Kingsman: The Golden Circle is a whole load of fun and offers glimpses of Vaughn unchained, for both better and worse. While I have loved every single film he’s made — Layer Cake, Stardust, Kick-Ass, X-Men: First Class, and the first Kingsman — it feels as if 20th Century Fox is maybe granting him a little too much freedom. But I definitely don’t want to see him hand off the reins to anyone else. He knows what makes his Kingsman films work, and just because The Golden Circle may feel a little long in the tooth, it’s still a cool movie, and one of the most fun playing right now. With such a horrible summer behind us, it’s nice to be able to enjoy heading back to the theater.