Boring and sometimes bloody, but mostly just a bloody mess. Made for anyone scared of buffering video chat feeds.

Rated R for violent content, pervasive language, some sexuality, and drug and alcohol use - all involving teens. 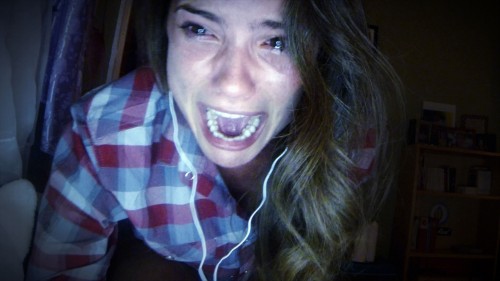 Horror movies need an ample amount of scares. While mostly relying on loud noises, a high level of tension can go a long way, especially when your film is chock-full of painfully thin characters. I had decent hopes for Unfriended — which had been playing a few festivals under its original title Cybernatural — with decent word-of-mouth out of SXSW and sitting at a currently astounding 88 percent on RottenTomatoes. Sometimes buzz can get in the way. Just take this month’s other horror offering, It Follows. A good idea can crash and burn quickly, especially when it comes to horror, and Unfriended is no exception.

It’s the one year anniversary of classmate Laura Barns’ (Heather Sossaman) cyberbullying-induced suicide and Blaire (Shelley Hennig) starts feeling remorseful as she prowls YouTube videos including Laura’s on-screen death. This doesn’t stop her from an episode of sexual Skype with her boyfriend Mitch (Moses Jacob Storm) before being interrupted by video calls from the rest of their friends: the blonde airhead Jess (Renee Olstead), pot-smoking Ken (Jacob Wyscocki), jockular Adam (Will Peltz), and an uninvited guest they can’t get rid of. The group is convinced it’s their bitchy friend Val (Courtney Halverson), as someone seems to have hacked Laura’s Facebook page, and they all start getting threatening messages. Soon enough, their mystery guest wants to play a game and they all start getting picked off one by one in increasingly gruesome ways by what may, or may not, be Laura’s vengeful spirit.

Before you quickly call afoul on Unfriended being a ripoff of a recent Modern Family episode, the film made its premiere at the 2014 Fantasia Festival. While it is an interesting idea to make a real-time horror movie with a topical subject such as cyberbullying, it’s a shame that writer Nelson Greaves and director Levan Gabriadze present us with such appalling characters. There is absolutely no one to root for, a requirement for any decent horror movie. And if you’re going to revolve your film around waiting for each character to meet their demise, you better make the kills worth the wait. At least some of the deaths are pretty gruesome, but not all of them, the best being a bit with a blender. But as far as scares, all Gabriadze can come up with is resorting to buffering video feeds cutting to loud screams.

The suspense is also short-shifted because it’s all so obvious. The writer/director may think it’s foreshadowing, but it’s really just lazy filmmaking. If you can’t guess how each character is going to die within seconds of their introduction, you must have already fallen asleep. Not that the film is a complete bore, but you need a mighty good story to pull off a film happening in “real time.” My biggest gripe is that we have five characters chatting online with their laptops and not one of them thinks to pick up their phone and call for help. It might be the biggest plot hole I’ve seen in a horror film in years.

While the last scare is really dumb and expected, at least the film doesn’t try to squeeze in a cheat ending. For real horror fans, there’s nothing to see here, move along please. Unfriended will probably wind up making a lot of money opening weekend. Making yet another notch on producer Jason Blum’s Blumhouse Productions’ belt of mostly undeserving hits — everything from the Paranormal Activity, The Purge, and Insidious franchises — but will quickly be forgotten, with audiences, and real word-of-mouth, resulting in the film being Unfriended from theaters in the blink of an eye.