May be just another throwaway Blumhouse cheapie, but this is one of the better ones. Made for horror fans looking for something to make them jump from deserved scares.

Rated R for some disturbing violent content and terror. 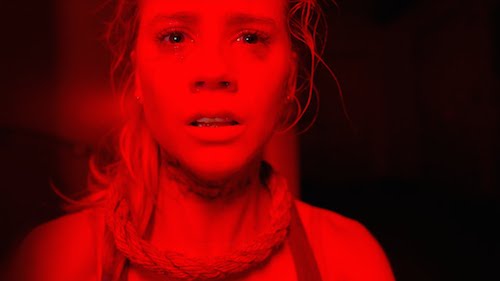 A lot can be forgiven in a horror movie if it provides enough thrills and chills. Even bad acting and questionable plot mechanics can be brushed aside — let’s face it, horror is not known for its acting — if there’s enough creepy atmosphere and plenty of jump scares to go around. So the biggest shock is that The Gallows delivers. Coming from Blumhouse Productions (Paranormal Activity, Insidious, Sinister) you pretty much know what to expect. But writers/directors Travis Cluff and Chris Lofing keep the pace racing along to its semi-reasonable explanation. There’s a little bit of mystery involved, but it’s the scare tactics that really makes The Gallows work.

In 1993, high school student Charlie is killed during a production of The Gallows — a play put on by the school. Twenty years later, the school is once again performing the same fateful play in an attempt to honor the tragedy by finally finishing it. Not if students Ryan (Ryan Shoos), Cassidy (Cassidy Gifford), and Reese (Reese Mishler) have their say. All three are ashamed to be part of the production — the two boys are jocks and Cassidy is a cheerleader — so to keep from having to perform, they decide to break into the school and tear the set apart. Unfortunately for them, Charlie seems to be haunting the school and won’t let them leave until he exacts some revenge.

Considering The Gallows runs a scant 81 minutes, it never overstays its welcome. Playing fast and furious with all the horror tropes you can think of, there’s always another scare around the corner. The most surprising thing is how well Cluff and Lofing handle them. The biggest scare in the whole movie simply involves something being on screen, with no musical stinger or sound effects. The cast are a bunch of nobodies, set up like cattle to slaughter, and, in this instance, there’s nothing wrong with that. They’re set up as clichés and you don’t mind watching them get taken out one by one. Which is the whole point, right?

And don’t let the found footage angle keep you away. This one is filmed much better than most, and some of the camera angles even make sense. When characters are standing around trying to figure out what to do, it’s never pointed in characters’ faces, because no one in real life would ever do that. And considering they use either the camera’s light, or its night vision, gives them an actual reason to be recording anything in the first place. If this had been made as a standard horror film, it would be just a bunch of characters running around in the dark. Here, it’s like a POV trip through a funhouse from hell. Something no one really wants, but horror fans will undoubtedly be pleased.

The Gallows may be just another throwaway Blumhouse cheapie, but this is one of the better ones. It’s way better than any of the Paranormal Activity films, so hopefully this one can find an audience. Just make sure you’re sitting next to someone who won’t mind you grabbing their arm, because you’ll be doing it often. That alone is high enough praise for any horror movie.