As Above, So Below

An inventive script and visuals helps "As Above, So Below" rise above (or below?!) its found-footage genre. Made for fans of horror-oriented, found-footage films.

Rated R for bloody violence/terror, language throughout, and shakeycam-induced vomiting. 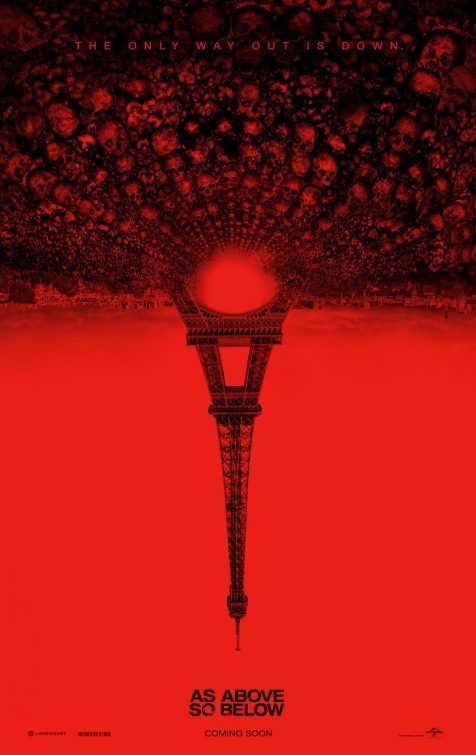 Another in a series of found-footage, hand-held, first-person films, As Above, So Below has its onscreen “crew” filming a documentary. This allows the film to avoid some of the problems with the genre, but others still remain (who is switching the various live cameras? Who is cutting the final footage together into a cohesive whole?). But it makes good use of sound effects to create atmosphere. However, the tune over the credits is downright lousy and jarring considering the minimal music during the film. The scares also favor actual creepiness over the usual, cheap jump-shocks. The lead female character “Scarlett “ (Perdita Weeks) is hardly the stereotypical horror-film trope. She is engaging, resourceful and intelligent. Which reminds me…
Much of what makes As Above, So Below work is similar to what made The Descent work; including a real life setting that is both mysterious and claustrophobic. The tension relates to the very physical threat of being in such an uneasy setting in the first place; being lost underground and with minimal lighting and resources.
But As Above, So Below then tries to introduce supernatural elements with mixed results. Part of the problem lies in how early there are presented, and how the characters react to them; which is to say not at all the way they probably should, or the way you would expect real people to react to the supernatural. Eddie Murphy’s skit regarding how white people respond to the metaphysical in horror movies comes to mind (“That’s peculiar”). There’s also a lot of exposition to set up the somewhat unnecessary reason for heading to the catacombs below Paris.
But once by all of that, it cleverly ties the title of the film in with how the visuals are presented, and how our heroes deal with the situation, borrowing from such movies as A Nightmare On Elm Street among others.
But eventually, the supernatural elements makes sense, and your basic horror flick becomes something more about redemption, with an ending The Descent only teased. Due to its locale, it may not stick with you long, but while underground, As Above, So Below works well enough despite its flaws.