I fear the film that is worse than this one this year. Made for nobody in their right mind.

Rated PG-13 for fantasy violence and action, and some sexuality. 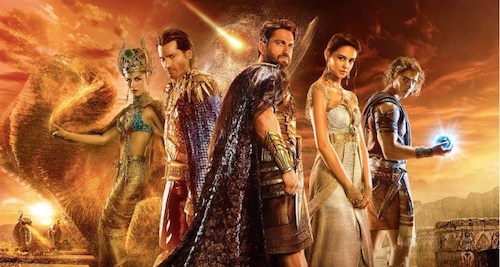 Nothing’s worse than when the movie gods are angry. I suppose after the phenomenal success Deadpool achieved, we were bound to be pummeled with at least one typically horrible February release. But no one ever could have predicted the awfulness of cult-favorite director Alex Proyas’s Gods of Egypt. Long gone are the glory days of The Crow and Dark City, and I, Robot looks like a masterpiece by comparison. I have never beared witness to Knowing and I hope I never have to.

It is mind-boggling to figure out what convinced, not just Proyas to direct, but for any studio to greenlight this trainwreck. In all honesty, my inner-teenager didn’t think it looked anywhere near as bad as what wound up on-screen. But my hopes were instantly dashed when I finally pulled the film up on IMDB and discovered it was from the same writers as Dracula Untold and The Last Witch Hunter. Long story short, Matt Sazama and Burk Sharpless should be run out of Hollywood like Frankenstein’s Monster at a lakeside picnic.

The plot is a disaster, with a voiceover explaining how gods decided to live amongst the puny humans, towering above the mortals when they’re not being sponged bathed or transforming into their golden alter egos. On Horus’s (Nikolaj Coster-Waldau) coronation day, his reign of King is not meant to be as his uncle Set (Gerard Butler) slays his brother and takes the throne. He also takes Horus’s eyes and Egypt is thrown into despair under Set’s rule. But the young Bek (Brenton Thwaites) wants to free his love Zaya (Courtney Eaton) and Horus agrees to help in return for his left eye and overthrowing Set for his rightful place as King.

Oy vey, what have the movie gods wrought upon us? There’s really not that much that be said for the dreck you’re in for if you buy a ticket. If the attendance at the press screening is of any indication, it will die a fast death at the box office — and rightfully so. Sazama and Sharpless have written one of the worst screenplays fathomable, and Proyas over directs beyond the point of camp. You can see the faintest inkling of a sense of humor amongst some of the actors — mainly Thwaites. And Geoffrey Rush as Ra, the God of the Sun, seems more than content with randomly bursting into flames when he’s not fighting outer space monsters from his spaceship.

Yup, you read that right, and it should tell you everything you need to know about Gods of Egypt. Just thinking about the film is enough to give me another headache — something you won’t leave without. At least it was’nt in 3D, but in all honesty, some of the effects may have gotten a boost from the third dimension. You could painfully tell when things are supposed to be flying at the screen. And to think the production budget is listed at $140 million, they should have used that money to keep it from ever getting made, because the studio will never recoup their costs on this flaming pile of dog turds.

Gods of Egypt is made with absolutely no audience in mind and simply races along from one painful action sequence to the next with an almost gleeful abandon to all common sense. Everything is just to get the characters from the start of the movie to the end credits, something that never come fast enough! I would suggest avoiding at all costs, but you were probably already planning on that anyway, and that will be the smartest thing anyone could do.