It’s no surprise Fuqua didn’t return — no one else should have either. Made for only the most forgiving action fans.

Rated R for strong violence and language throughout. 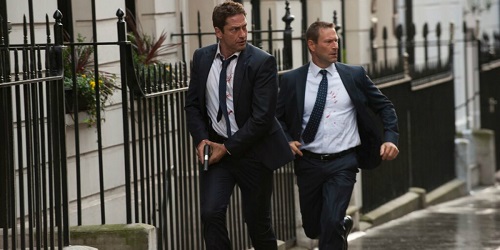 Olympus Has Fallen was a big surprise when it came out three years ago. With Antoine Fuqua in the director’s chair, and Gerard Butler playing a John McClane clone, the White House was saved and the President lived to lead another day. While no one was clamoring for a sequel, with the same writers back, you would think London Has Fallen — Creighton Rothenberger and Katrin Benedikt — should have been better than this.

Because all we get is the age old story of a sequel that fails to live up to the original. It’s really sad in this case considering it didn’t have to reach very high to at least be entertaining. Olympus may have felt like the film A Good Day to Die Hard should have been, but London doesn’t feel like a true sequel to its own original. Somewhere in the last three years, the spirit of Olympus has fallen. And it’s no surprise Fuqua didn’t return — no one else should have either.

Kicking off with a muddled timeline, we catch up with President Benjamin Asher (Aaron Eckhart) and Secret Service agent Mike Banning (Gerard Butler) still chummy as ever. Mike is settling into domesticated life with his pregnant wife Leah (Radha Mitchell), and considering resigning. Meanwhile, the President has just gotten the call that the Prime Minister of England has suffered a heart attack and the two are off to London for the most over-protected funeral ever. Along for the ride is Secret Service Director Lynne Jacobs (Angela Bassett) where they get sucked into a terrorist attack that cripples London with Vice President Trumbull (Morgan Freeman) doing what he can to help from back in the States.

When it comes to action movies, we don’t need a whole lot of plot. An inciting incident is all we need to kick off any amount of big, dumb, fun. Unfortunately, London takes a full half hour before there is any action whatsoever, making you wonder if this even is an action movie. Then, we get a reasonably well-executed first action sequence, but from there, the film plunders the bottom of the ’80s action barrel throwing every cliché it can at the screen. Anyone who can’t figure out who’s behind the attack has never seen a movie before or may have fallen asleep — which viewers are bound to do.

Poor Butler is stuck starring in yet another boneheaded action film that feels every bit as long as Gods of Egypt: eternal. I will admit, after that first big action scene, I thought maybe we were in for another exciting treat. I was willing to suspend my disbelief. Until it kept getting stretched thinner by the minute. This is the kind of action film where a character may hilarious exclaim, “Get to the chopper,” but then when the hero goes running down a tight hallway with multiple baddies shooting at him, the character doesn’t get hit.

Probably the only positive thing to say about London Has Fallen is that at least it’s not as bad as Gods of Egypt. But that’s like trying to say one turd smells better than another. A turd is still a turd. The cast are playing their characters as straight as an arrow which only makes the film feel unintentionally funny. But even that only lasts so long.