The story is pure '90s ridiculousness, but it's not the worst film Smith, or Lee, have made. Made for Smith's biggest fans looking to scratch their itch until 'Bad Boys for Life' comes out, or those lucky enough to see it as it was made to be seen.

Rated PG-13 for violence and action throughout, and brief strong language. 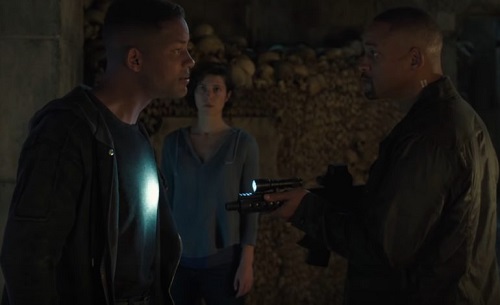 There’s a lot to be said about nature vs. nurture. Unfortunately, for Ang Lee’s new action-thriller Gemini Man, its trio of writers — David “Game of Thrones” Benioff, Billy Ray, and Darren Lemke — are convinced that a clone will be exactly the same regardless of differences in upbringing and personal experiences. While it may work to beat out their been-there-done-that plot mechanics, it completely deflates the emotional impact of the finale.

These kinds of introspective character arcs may not be new to Lee’s films, it comes across as extra silly when the studio is trying to market the film as a “Will Smith vs. Will Smith” action spectacle. While it may feature some fantastic bursts of action, the pace is all over the map with too many monologues padding out the runtime. Which is a shame, because Smith has more chemistry with co-star Mary Elizabeth Winstead than himself.

Henry Brogan (Smith) is the best government assassin in the biz and all he wants to do is retire. But just wouldn’t you know it, he’s just been informed by his friend Jack (Douglas Hodge) that his last target was an innocent man. Now, his old handler Clay (Clive Owen) unleashes project “GEMINI” to bring him down leaving Henry on the lam with fellow agents Danny (Winstead) and Baron (Benedict Wong) helping to save all their rears. What they don’t know, is that GEMINI consists of Henry’s younger, far more lethal clone Junior (a deaged Smith), who will stop at nothing to take Henry down. At least so long as his feelings don’t manage to get in the way.

Gemini Man is reported to be a technological breakthrough, by those who happened to see it at the TCL Chinese Theatre in Los Angeles premiere. Lee — and cinematographer Dion Beebe — have shot the film in 4K 3D at 120 frames per second (fps). And the marketing is pushing for audiences to experience it in what they’re calling “3D+” and I’m sure it looks amazing. Unfortunately for most, only 14 theaters in the entire country are equipped to come even close, but can only show it in 2K 3D at 120fps — as reported by Polygon.com. And, if you’re lucky, you might be able to find it playing in 2D at 60fps, but don’t hold your breath.

Why studios continue to allow these blockbusters to be made when most of the world won’t even be able to see them as intended is beyond me. Until theaters can catch up, maybe it’s not quite time to be testing the boundaries of filmmaking. Plus, most moviegoers hate watching high frame rate (HFR). I was able to see the first two Hobbit films in HFR and loved every second of them in the format, but it is a very polarizing experience. To try to make something as mainstream as a Jerry Bruckheimer-produced action spectacular makes even less sense. But if anyone happens to see it properly, feel free to comment back with any thoughts.

As for the film itself? It’s been great to have Smith back on screen again this year. He never fails to deliver with his endless charm and charisma whether he’s slathered in blue CGI or playing a 30 year younger version of himself. With Winstead kicking ass by his side, the two play off each other very well, and it’s nice to see them even crack wise about whether the two of them should/could wind up together in the end. (Spoiler alert: they don’t!) But that should be seen as a sigh of relief and not a true spoiler.

Unfortunately, they’re saddled with a lackluster screenplay that’s so very by-the-books-’90s — which makes sense since the screenplay has been in development hell since as far back as 1997. Considering it’s a product of the ’90s, it’s understandable to see Bruckheimer producing. The best advice is to check your brain at the door which leaves room for some fun to be had. Just never stop to think about the shenanigans for too long or it’ll ruin things faster than a 2D 24fps presentation.