Smart, simple, and terrifying. This film dares you to see how long you can hold your breath. Made for fans of Bad Robot's mystery box technique and those in need of their adrenal glands squeezed dry.

Rated PG-13 for thematic material including frightening sequences of threat with some violence, and brief language. 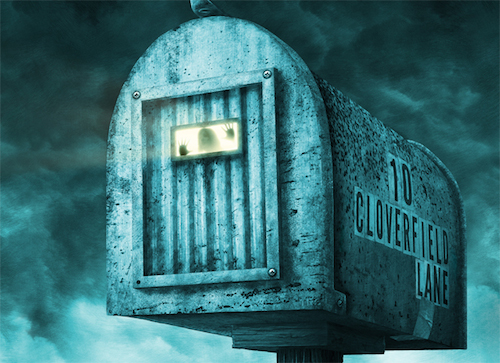 Well, that didn’t take long. Just when it seemed as if Triple 9 had the early season all wrapped up as the year’s biggest thrill ride, 10 Cloverfield Lane shows up. From the masterminds at Bad Robot comes a film that’s familiar in title and theme, but even better and scarier than Cloverfield. That film still stands as one of the best found footage films since the birth of the genre, and now, is 10 Cloverfield Lane the sequel everyone’s been waiting for? I hate to break it to you, but this is not a sequel. While it does share some similarities and keen eyed fans will find ways to connect it to not just Cloverfield, but also J.J. Abrams’s own Super 8, this is a beast all its own. And I couldn’t be happier about it.

To try as hard as possible to avoid spoilers, this will be brief…

Michelle (Mary Elizabeth Winstead) has decided to leave her fiancé Ben. She packs a bag and leaves her engagement ring behind. After stopping for gas, she winds up in an accident and wakes up in a bunker, attached to an IV, and her leg chained to a pipe. Michelle was saved by Howard (John Goodman), who found her on the side of the road and brought her to safety. He tells her that everyone she knows is dead, and the world above has been wiped out by some kind of attack — possibly chemical. The two are not alone, Emmett (John Gallagher Jr.) is also stuck underground, but Michelle doesn’t trust Howard for a second and winds up in a fight for her life to discover the truth.

We’re going to be hard pressed to find a more nail biting thriller this year than 10 Cloverfield Lane. From start to finish, it’s non-stop intensity. This is a film that dares you to see how long you can hold your breath. In true Bad Robot fashion, we’re treated to realistic characters in the most dire situation, with the terror punctuated with natural moments of hilarity. Winstead, Goodman, and Gallagher deliver in spades, and even more so does director Dan Trachtenberg. It scares me to think that a director has made a debut film of this magnitude, but I can’t wait to see what he comes up with next.

Screenwriters Josh Campbell, Matthew Stuecken, and Damien Chazelle (Oscar nominated writer/director of Whiplash) have carefully crafted a film that builds to a boiling point before delivering on its go-for-broke finale. There are, of course, a few things you could nitpick, like how Michelle and Emmett sure have access to a lot of weapons they could use against Howard. But these are characters more worried about figuring their way out of the situation, rather than simply slashing their way out. And in that regard, the film brilliantly sets up its dominoes before letting them fall. There is a twist, don’t you worry, and no matter what anyone says, it’s not a cheat. Best case scenario is to just go along for the ride, because a visit to 10 Cloverfield Lane is worth making.