Chazelle and Gosling take audiences on a humanistic adventure that sheds a light on the overshadowing trauma of the mourning process. Made for biopic fans and those who enjoy films that are more about the human side of the Space Race. 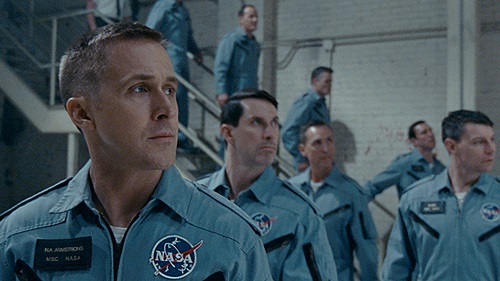 While the geek in me loves movies which take place in space, even more so I love films about space. There’s just something more grandiose about them — maybe it’s the vast, terrifying, emptiness. So when I heard Damien Chazelle was making a biopic about Neil Armstrong, I got very excited. Chazelle may have blasted into spotlight with La La Land — although I prefer Whiplash — he’s one of the best new directors working today. Working with Ryan Gosling again — as Armstrong — I was hoping this would be more Whiplash-Chazelle than LLL, and it winds up being a mix of both. Taking a more emotional approach than some may appreciate, First Man is fantastic from start to finish.

Starting in 1961, we make our way through the years to 1969, as Armstrong goes from the Gemini project to Apollo 11 where Armstrong became the first man to walk on the Moon. Plunging us into the emotional core of the film, the beginning focuses on Armstrong mourning the death of his almost 3-year-old daughter, Karen (Lucy Stafford). Humble and determined, Neil makes his way through the space program while his wife Janet (Claire Foy) tries to make peace with the fact her husband may never get over Karen’s passing.

For those expecting First Man to be a glorious adventure into the unknown, it is. However, Chazelle — and screenwriter Josh Singer, adapting James R. Hansen’s book — takes a humanistic approach. Gosling is always fun as the snarky, charismatic charmer, but he’s incredible as Armstrong providing the internist turmoil only a parent could understand. With my own daughter’s birthday just a week ago, it’s a good thing the film didn’t the detail of Karen dying on Neil and Janet’s sixth wedding anniversary. It already made me tear up once, that would have just made it even worse. Let alone Chazelle suckerpunches you at the end again as Armstrong stands before the East Crater.

First Man is every bit deserving of the buzz it’s created already and will be up for some major awards come Oscar time. Chazelle has crafted a heart-wrenching tribute to an American hero that begs to be seen on the biggest screen possible. With a few sequences shot in IMAX — something tells me it’s at least the space scenes — this is one of the best biopics to have come out over the last few years, and it’s absolutely Chazelle’s best film yet. He continues to outdo himself and I will always be watching to see what he’s got up his sleeve next.