This is the comedy to see this weekend. Full of hilarity and action and stuff. Made for Shane Black fans or anyone looking for a classic buddy movie. 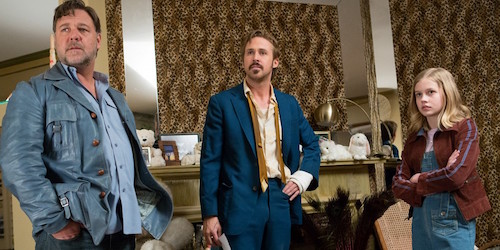 Not many directors are entrusted to make the kind of film they want to. Studio interference runs rampant in Hollywood so it’s some kind of miracle that Shane Black has been blessed with such freedom, including his latest project The Nice Guys. Having been writing since way back when he sold his first script at the tender age of 24 for a little movie called Lethal Weapon, the man has been churning out the hits for nearly 30 years. Not to mention, giving me plenty of “Christmas” movies to watch every year. And while you could say he falls victim to his own trappings at times, they’re spectacular tropes that work every time. With that said, how does his junior outing fare stacked up against the likes of Kiss Kiss Bang Bang and Iron Man 3? It lives up to expectations and then some.

It’s 1977 in Los Angeles and Jackson Healy (Russell Crowe) is on the job. While never wanting to take the time to become a professional dick, he still manages to be the dick you want on your side. On the flip side of that, Holland March (Ryan Gosling) is probably the “world’s worst detective” as his daughter Holly (Angourie Rice) so elegantly puts it. And in true Johnny Gossamer fashion, their two current cases quickly become one. Healy and March are looking for the daughter of Judith Kuttner (Kim Basinger) — who happens to work for the Department of Justice — Amelia (Margaret Qualley). And a twisted tale begins to unravel involving everything from the porn industry to the New York mob and only March and Healy have what it takes to put all the pieces together and stuff.

The Nice Guys is classic Black. You’ve got two guys who don’t like each other, the wise beyond her years adolescent, a labyrinthine plot, snappy dialogue, a nice little conspiracy tying it all together, and — wait for it — a splash of Christmas. Gosling and Russell make the perfect odd couple and they also play off the young Rice hilariously. This is the funniest Gosling has ever been. The man has spectacular physical timing and can take a pratfall with the best of them. Crowe is either wearing a fat suit or may have let himself go for the part, but this is the most likeable he’s been in a long. Even Keith David manages to score some huge laughs. The Nice Guys is one of the best comedies of the year, but with Shane Black at the helm it comes as absolutely no surprise. There are two comedies opening this weekend, but this is the one you shouldn’t miss.