Scrapes the slate clean leaving plenty of room for Michael and Laurie to slice new future escapades. Made for michael Myers fans and anyone looking for a scary good time this, err, Halloween. 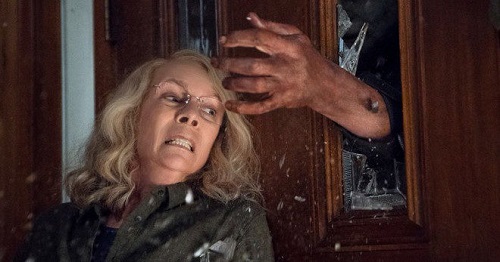 As unkillable as Michael Myers is, so is the Halloween franchise. Launching with John Carpenter’s 1978 classic, the past 40 years have been hit-and-miss as Michael has lumbered his way through sequels and remakes. With the announcement of co-writer/director David Gordon Green getting the greenlight to make a new direct sequel to the first film — with both Carpenter’s and Jamie Lee Curtis’s blessings — producer Jason Blum has brought Michael back for another game of cat-and-mouse with our beloved Laurie Strode (Curtis) in Halloween.

Forty years after Laurie’s fateful night with Michael, true-crime podcasters Aaron Korey (Jefferson Hall) and Dana Haines (Rhian Rees) arrive at Smith’s Grove Sanitarium to interview Michael with hopes of recording a sit down between him and Laurie. Michael is about to be transferred to a new facility and just wouldn’t you know it, the bus wrecks and he’s back on the prowl for Laurie. Cutting another deadly path through Haddonfield, Laurie and Sheriff Frank Hawkins (Will Patton) — first responder in the original Myers case — are hot on his heels. Laurie is on a mission to kill Michael once and for all and keep her daughter Karen (Judy Greer) and granddaughter Allyson (Andi Matichak) safe.

It’s been a long road to a new Halloween: nine years since Rob Zombie’s atrocious Halloween 2 and 16 years since Resurrection. Green and his co-writers (Danny McBride and Jeff Fradley) do a fabulous job of keeping this sequel from entering remake territory. It may be full of nods, reversals, and references to the entire franchise, yet manage to make a film that stands on its own. Curtis is fantastic in updating Laurie as an over-prepared badass and never slips into pity me lunacy. They could have easily lead Laurie down the troupe of secluded cat-lady, but instead took the empowered approach.

The rest of the cast perform admirably as well and all get a chance to shine. Matichak makes for a great Laurie for a new generation, Patton gets to fill in for Sheriff Brackett, while Greer manages to nearly steal the whole movie. The young Jibrail Nantambu as Julian — the youngster being babysat by Allyson’s best friend Vicky (Virginia Gardner) — gives her a run for her money. Green and McBride have huge respect for Carpenter’s film and it oozes from every frame. Having Carpenter co-write the score only adds to the nostalgia. Gory, intense, brutal, occasionally hilarious, and offering multigenerational appeal, this is the Halloween sequel we’ve been waiting for.