The Space Between Us

Hilariously bad. Will go down as one the year's biggest trainwrecks. Made for i'm not sure who it's made for. It's too dumb for adults, but takes itself way too seriously for teens. 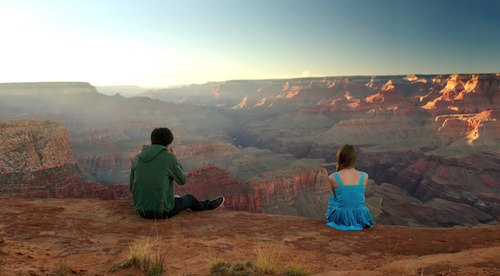 A trainwreck of a movie can be quite the sight to behold. There are those that are obviously doomed from early production — Fantastic Four — and then there are those that come completely out of nowhere. The Space Between Us is the latter. The first sign something was amiss was an original release date in August. Then it got bumped to December, and is now finally hitting theaters this weekend. The bad news is that there were probably lots of edits over the last six months. This is the first — but probably not the last — hilariously awful film of the year.

In 2018, astronaut Sarah Elliot (Janet Montgomery) is headed to Mars, while Nathaniel Shepherd (Gary Oldman) has spearheaded the expedition, with hopes of colonizing the planet. Two months later, Sarah is dealing with an unexpected pregnancy, but instead of turning everyone around, they continue on with Sarah dying during childbirth. Sixteen years later, Gardner Elliot (Asa Butterfield) is dealing with his classified status, while living on the red planet. He communicates with Tulsa (Britt Robertson), a fellow teen who is tired of being the picked on foster kid at high school. Gardner writes off their not-meeting as having a disease and is housebound. But soon enough, Gardner discovers a photo of his mom with a mysterious man and demands he be brought back to Earth so he can meet his long lost dad.

All of the trailers for the film have sold The Space Between Us as another young-adult-novel-turned-film. I was surprised to find out that Allan Loeb’s boneheaded screenplay was an original. Between Loeb’s ham-fisted plot mechanics and director Peter Chelsom’s bludgeoning idea of heartwarming, the film at least tries to rely on the charm of its cast. And it does pretty well for the first hour. Then suddenly, everything goes awry and just keeps getting worse as it chugs along to its ludicrous final “twist.” The moment is almost hilarious enough to warrant a ticket, but then you’d just be encouraging everyone involved.

Butterfield and Robertson do have occasional moments of chemistry, but there are far more moments when she feels almost like a mother-figure. Which is not surprising, considering she is seven years older than him. Why she is still getting cast as a high schooler is beyond me. This isn’t the ’80s and it’s never believable. Carla Gugino is just about the only one who manages to maintain any kind of dignity as Oldman gives another hilarious over-the-top performance. Something that does not belong in a tween-“romance.” It also features the worst zero gravity effects seen in a long time, and is filled with song choices that make the CW feel subtle.

I’ve heard mention that before the film got pushed back, audiences complained that Gardner was too street smart. Most of that seems to still hold true, except for a scene where a man on horseback frightens the bejeebus out of him. That’s how inconsistent the film is now. There’s no reason to give up your hard-earned cash on this mess. A colleague told me his reaction was that the film was forgettable, but that was when he saw it two months ago. Whatever changes were made were in no way for the better. The Space Between Us is a hilarious disaster now, and it makes sense for the studio to have finally decided to give up and dump it in February.