Nothing can prepare you for the dour, joyless dreck director Josh Trank has unleashed. Made for no one. 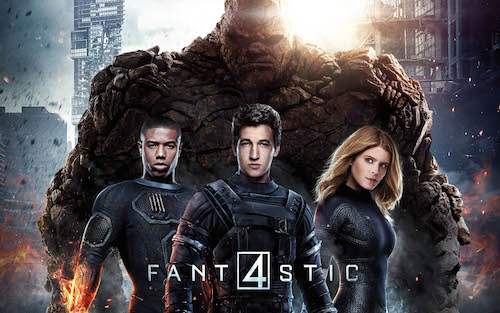 A picnic would be fun.

The Fantastic Four reboot is anything but fun.

What they have to be wishing for is getting their rights back. Not even necessarily so they can reboot it again and make it part of their Marvel Cinematic Universe, but hopefully so they can simply lock the rights in a vault, smash the key with Thor’s hammer, feed the scraps to Hulk, then have Iron Man destroy the vault by throwing it into a wormhole for a Chitauri ship to eat for lunch. Am I being too hard on the film? Absolutely not. Just you wait, intrepid filmgoers, for you will not be able to prepare yourselves for the dour, joyless dreck director Josh Trank (Chronicle) has unfathomably unleashed.

*Fear not true believers, I’m going to spoil all the boring details.

Presenting us with a full-fledged origin story, we begin this Fantastic Four with elementary age Reed Richards (Owen Judge) joining forces with a young Ben Grimm (Evan Hannemann) as they complete building a “biomatter shuttle” (aka teleporter). In high school, Reed and Ben are presenting their machine as a science fair experiment, much to the chagrin of Mr. Kenny (Dan Castellaneta). Here, Sue Storm (Kate Mara) and her adoptive father Dr. Franklin Storm (Reg E. Cathey) recruit Reed (Miles Teller) to the Baxter Foundation. Turns out, Reed has figured out how to make Victor Von Doom’s (Toby Kebbell) own teleporter bring back what is sent over to another dimension. Soon enough, Reed, Sue, Johnny Storm (Michael B. Hall), Victor, and Ben (Jamie Bell), have their experiment threatened with being handed over to NASA to explore the alternate universe they’ve worked so hard to discover.

Wanting to become the new Neil Armstrong/Buzz Aldrin, the four men jump into the teleporter to make their own first step for all geek-kind. In the process, Victor falls into an expanding puddle of energy and gets left behind, while the teleporter malfunctions bringing back Reed, Ben, and Johnny, resulting in an explosion. Now, Reed is a real-life Stretch Armstrong, Ben has been transformed into a walking pile of rubble called The Thing, Johnny can light himself on fire and fly, and Sue has the ability to transport in and out of reality (i.e. invisibility). Knowing that the government is going to take them under command and use them as weapons, Reed manages to escape. One year later, Reed is still on the run, but is eventually taken in by Ben after being found out by Sue. And just wouldn’t you know it, here comes Victor, now calling himself simply “Doom,” with a plan to wipe out human existence, leading our unlikely heroes to a battle to save our very existence.

Anyone who thinks that sounds like it should be the setup to a spectacular action extravaganza is dead wrong. That is the entire movie! Screenwriters Simon Kinberg (who may have given us Mr. & Mrs. Smith, Sherlock Holmes, and X-Men: Days of Future Past, but also churned out xXx: State of the Union, Jumper, and This Means War), Jeremy Slater (The Lazarus Effect), and Trank himself, wouldn’t know exposition if it punched them in the face. Packed full of montages ad nauseum, there’s not one moment of excitement in the entire 100-minute runtime. This is the most boring, soulless comicbook movie ever committed to cinema. To quote my friend: “When the movie gets worse after your leads get super powers, there’s a big problem.”

The cast has zero chemistry — not even Mara, Jordan, and Cathey, whom we’re supposed to believe are a family — and while I’m normally not bothered by Teller, this is the most mediocre he’s ever been. As good as he may be in The Spectacular Now and Whiplash, this Reed Richards might as well be walking around with a bottle of Prozac glued to his hand. The whole movie feels that way too. It slogs through the paces, with a few random moments featuring special effects making you think you’re watching a work print. It’s no wonder Fox scrapped the 3D conversion, it doesn’t even look good in 2D.

This movie also makes me think it’s why Trank is no longer attached to a Star Wars film. Someone at LucasFilm/Disney undoubtedly caught an early viewing of this and put a stake in that mistake. Audiences can breathe easy now that he won’t be able to run another beloved franchise into the ground. Leave that for Lucas! As for Fantastic Four, I’m sure you already knew if you were going to bother catching a showing, but there are far better things you can do with your time and money. Like using your hard earned cash for toilet paper, or watching paint dry. Either way, that’s exactly what you’re doing if you promote this film. Avoid at all costs. There is nothing Fantastic to see here. Congratulations Trank, you’re now responsible for two of the worst superhero movies ever made.