A quartet of good actors trying to make the dumb script look smarter than it is. Made for fans of the cheap Blumhouse Productions like 'Paranormal Activity.'

Rated PG-13 for intense sequences of horror violence, terror and some sexual references. 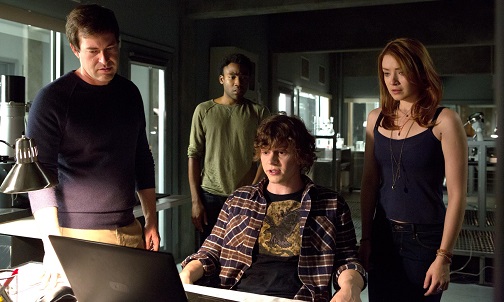 At this year’s Sundance Film Festival, there was a disturbing trend amongst the horror film selections: they all suffered from lackluster endings. It seems as if all the directors and writers had some really fun ideas and then painted themselves into a corner. The same problem comes calling once again in The Lazarus Effect, the new thriller from Blumhouse Productions — the company responsible for the Purge, Paranormal Activity, and Insidious films. Not even this group of really good actors can save the film from its ridiculous finale.

Scientists Frank (Mark Duplass) and Zoe (Olivia Wilde) have created a serum in the basement of an unnamed university, hoping to bring the dead back to life. The couple have put off a married life together to complete their research, along with the help of Clay (Evan Peters), Niko (Donald Glover), and college student documentarian Eva (Sarah Bolger).

The group finally sees their testing pay off after they bring back a dog named Rocky (Cato) who was seemingly put down due to cataracts. Somehow, the serum has also managed to cure its ailments, but they notice the dog’s brain activity is a little on the overactive side. After Big Business swoops in and steals all their documents from violating the school’s ethics code, the team sneaks back into the lab to duplicate the experiment, resulting in Zoe’s electrocution. Grief-stricken, Frank talks everyone into using the serum to bring Zoe back to life, causing all hell to break loose.

If The Lazarus Effect has one thing going for it, it’s the scant runtime. Clocking in at only 83 minutes, at least director David Gelb moves things along at a mostly breakneck pace. Unfortunately, Luke Dawson and Jeremy Slater’s screenplay is a huge mess. While it starts off promising enough, it trades in any kind of creepy atmospherics for slasher tropes. Wilde and Duplass make for a nice enough couple, but eventually, Frank’s motives take a too-quick, unexplained turn. Wilde does what she can as the possibly-possessed Zoe, but what they aren’t advertising is that the film is a bigger ripoff of Luc Besson’s Lucy than the ’80s cult classic Flatliners. Turns out, Zoe isn’t possessed, her brain is evolving at an exponential rate: what should take millions of years is happening in minutes, we’re told.

The dopiest aspect of The Lazarus Effect is when it dissolves into the old science vs. religion talk. Dawson and Slater have absolutely nothing to say on the subject, which is probably why they seemed to throw their hands up in the air and turn Zoe into another killer-on-the-loose à la Michael Myers or Jason Vorhees. And then there’s the ending. I would never give anything away, and let’s face it, all horror films have their audience, but this one takes a serious turn for the unintentionally hilarious. The last scene is so confounding, it oddly leaves me hoping for a sequel for a true battle between good and evil. As it stands, The Lazarus Effect is only deserving of being another Blumhouse Production bound to make a huge profit opening weekend before it’s quickly forgotten and rushed to video.