Fantastic Beasts: The Crimes of Grindelwald

Not as boring as the first film, but every bit as convoluted and overwrought. Made for Potterheads only.

Rated PG-13 for some sequences of fantasy action. 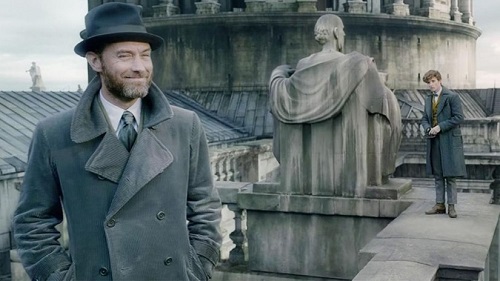 It’s not a good sign when my wife — a diehard Harry Potter fan — doesn’t care about J.K. Rowling’s Fantastic Beasts series. After And Where to Find Them kicked things off to a lackluster start, director David Yates seems to have come out of his post-Tarzan autopilot. It’s too bad Rowling still can’t conjure enough of the old Potter magic she weaved so well. Thankfully, the cast fare better this time around even if the plot still barely makes a lick a sense — as it plows through some challenging franchise growing pains.

London, 1927, Gellert Grindelwald (Johnny Depp) is imprisoned by the American Ministry of Magic. Grindelwald is being transported back to London and is freed by one of his followers. Also in the UK, the British Ministry of Magic calls upon Newt Scamander (Eddie Redmayne), offering him a deal to earn back his travel rights: work for the Ministry as an Auror. Newt rejects, placing him on special duty to locate Credence Barebone (Ezra Miller) who has surfaced in Europe. Meanwhile, Grindelwald is rising to power and it turns out Newt may be the only one who can stop him as Albus Dumbledore (Jude Law) has made a blood pact with Grindelwald to not fight each other.

I’ve really minimized the plot here. It gets super confusing — something Rowling had a huge problem with in the last outing. After reading through my review of the first film, they have definitely improved upon a few things. The action may still be chaotic, but the effects are way better and more believable. Newt learned how to enunciate between films and they’ve put Tina Goldstein (Katherine Waterston) in the background. However, Dan Fogler is still trying way too hard as he does in everything. At least Alison Sudol’s Queenie is nowhere near as annoying. Ezra Miller will make a formidable foe in upcoming entries, and Zoe Kravitz brings some levity stuck heartbroken in a brother/brother love triangle.

And then there’s Depp. While many people are outright furious over his casting, this is the least annoying he’s been in a long time. Even in the grand finale he never chews the scenery the way we’ve come to expect. Love him or hate him, he’s not horrible, but he’s also never great. And Law actually makes for a wonderful young Dumbledore. All things said, it seems like hardcore Potter fans are eating it up and that’s great. The movie is strictly made for them and they can have it!

Just because I’m obligated to sit through it so I can throw in my two cents, doesn’t mean I need to raise the pitchforks and wish Rowling throw in the towel. Fantastic Beasts: The Crimes of Grindelwald does exactly what you expect it to do: get audiences from point A to B while leaving them wanting more. Whether more is better is something we’ll have to wait to find out. In the meantime, at least Potterheads have something new to keep their appetites whet.