Elvis is given his due and then some in typical Luhrmann spectacular spectacular fashion. Made for Elvis fans and Luhrmann fans alike. 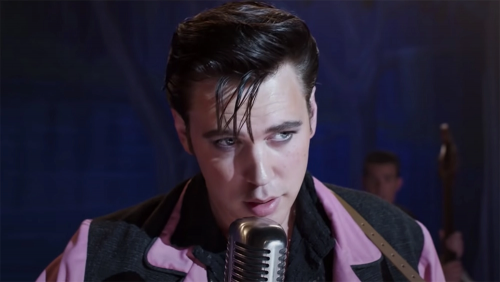 When the subject of your biopic is larger than life, it calls for a larger than life director. So it should come as no surprise to find Baz “Spectacular Spectacular” Luhrmann helming Elvis with what could have been a self-indulgent, bloated mess. Oh who are we kidding? Of course it’s self-indulgent and bloated, but that’s what Luhrmann does best: Making Elvis the kind of biopic fit for a, well, king.

Spanning from childhood to Sun Records, and Beale Street to Vegas, it’s no surprise the film runs 159 minutes — with word of a four hour cut to boot! As is, Elvis overflows with the razzle dazzle we expect from Luhrmann, along with a jaw dropping performance from Austin Butler as “The King” himself. Needless to say, there’s a whole lotta shakin’ goin on!

Butler puts in an amazing performance that’s a complete transformation, never feeling like impersonation. He breathes life into his portrayal and could go on to carve out a whole career as Elvis — not to mention a possible Oscar nod — but I doubt that was his intent. Although with the release of the soundtrack, it looks like there was quite a mix of Butler’s own vocals, along with Elvis recordings.

The rest of the cast are exceptional — even if Hanks feels more like stunt casting than he ever has before — especially Kelvin Harrison Jr. as B.B. King. Meanwhile the cinematography, editing, and music all combine as an assault on your senses. Luhrmann manages to do what he does best by stapling Elvis’s life to the Moulin Rouge template. That in itself probably sounds like either a ringing endorsement or a public service announcement. For the rest of us, Elvis lives!
The best way to gauge your enjoyment of Elvis rests solely on two things: your love for Elvis and your love for Luhrmann films. If you’re anything like my wife — who loves both — you’re in for one hell of a show.