Egerton makes Malek look like amateur hour, this biopic completely rocks! Made for Elton John fans, musical fans, and anyone looking for a spectacular spectacular.

Rated R for language throughout, some drug use and sexual content. 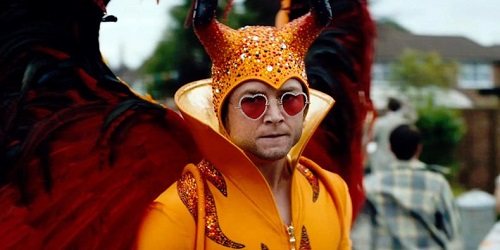 Comparisons are going to be made between Bohemian Rhapsody and Rocketman — and I am, too. Both feature incredible performances, astounding soundtracks, the same director, and a gay centerpiece. For those paying attention, Rocketman is the better of the two films, and features a superior performance. As good as Rami Malek was at impersonating Freddie Mercury, it shows that’s all it was. Especially when comparing him to Taron Egerton’s complete embodiment of Elton John. The film soars — when it’s not edging toward cliche — and features some of the best renditions of Elton and Bernie Taupin’s greatest hits since they first graced the airwaves.

Elton has arrived … at A.A. and he’s here to tell everyone the story of how he made it from childhood to surviving celebrity status after abusing drugs and alcohol. And sex. And shopping. And bulimia. Starting with Young Reggie (Matthew Illesley), all he wants from his father, Stanley (Steven Mackintosh), is a hug. “Don’t be soft,” he tells him, and keep his hands off his record collection. His mum, Sheila (Bryce Dallas Howard), tries to be a decent mother, while his grandma Ivy (Gemma Jones) helps him with driving to the Royal Academy of Music to hone his skills as the err, piano man, we all know and love. But Elton has to also deal with his homosexuality as he falls in love with his manager, John Reid (Richard Madden), while Bernie (Jamie Bell) tries to keep his best friend from killing himself through his addiction to booze, sex, drugs, and rock and roll.

One of the biggest problems with Bohemian Rhapsody was its PG-13 rating and directors Bryan Singer and Dexter Fletcher merely skirting around Freddie’s sexuality. But make no mistake, Rocketman revels in everything gloriously Elton John and is never scared to pull out all the stops. The production design is top notch leaving nearly no Elton costume unturned. Flashy, heavily choreographed — “Saturday Night’s Alright (For Fighting) is a showstopper — hilarious, and heartfelt, Rocketman is the best biopic anyone could ever hope for in a film about Elton John.

If there’s one issue with the film, it’s the way it handles the daddy issues. It’s so on the nose it borders on parody. Thankfully, it’s whittled down to one scene and is over before it gets too painful — sadly, not in the way intended. But we came here for the show and Taron delivers marvelously. Considering Malek won Best Actor for Rhapsody, Egerton deserves two. Even Jamie Bell comes off far more likeable than normal. Fletcher has made the film he probably wishes he could have made after taking over Rhapsody, but it’s far more fitting here, considering the subject on hand.

Despite the subject matter, it’s all handled surprisingly lightly. It never gets too heavy handed or melodramatic and keeps the pace flying by. I don’t know if I would call it Best Picture worthy, but it’s far more than the other biopic that keeps getting mentioned. Rocketman is a total blast from start to finish and flies by at the seat of its pants. A good time for all is guaranteed and make sure to stick around the end credits to hear the Elton John/Egerton duet written just for the movie. It’s too bad “(I’m Gonna) Love Me Again” plays over the credits, it may have killed its chance at Best Song, but it’s still an incredible effort and a fantastic send off to a musical spectacular spectacular.