A feel-good and crowd-pleasing win with a fantastic ensemble. Made for biopic fans and those looking to see how the Williams' sisters got their start. 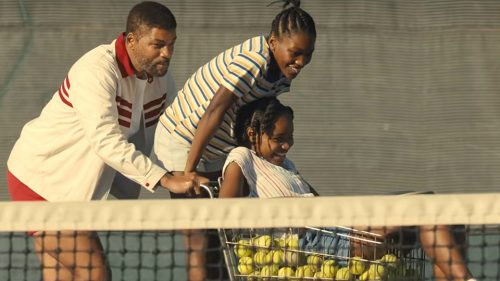 A lot of buzz surrounds the release of King Richard — not all of which is positive. Yes, you could assume a film about two of the best athletes in the world would focus on them, but what we get is the story of Venus and Serena Williams’ rise through the persistence of their father, Richard. Ultimately, King Richard is a love letter from the Williams sisters about their father; they’re also executive producers, so it’s not like the film was made without them. With Will Smith in the lead — surrounded by an amazing ensemble — King Richard hits all the expected notes of a standard biopic, with ace performances ensuring game, set, match, by the time the credits roll.

Richard Williams (Smith) knows without a doubt that his daughters, Venus (Saniyya Sidney) and Serena (Demi Singleton), will one day rule the world of tennis. He spends his nights working as a security guard, while trying to find his daughters a coach during the day. But it’s obvious how hard that can be when you’re a black family living in Compton. Eventually, he finally forces his way into showing Paul Cohen (Tony Goldwyn) what they can do, leading to Venus conquering the juniors tournament.

With the focus on Richard, Smith does a hell of a job. I mean, it’s Will Smith in an Oscar-bait role, how could he not be good? But the real surprise comes from him being overshadowed by Aunjanue Ellis as Oracene and Sidney as Venus. Another shoutout goes to Singleton for making sure we see the pained support of Serena for Venus as she’s put on the backburner by dad, but gets her own help from her mom. Most of the best of Zach Baylin’s screenplay is given to Ellis. Goldwyn is more likeable than usual and Jon Bernthal nearly steals all of his scenes, but everyone manages to hold their own, keeping the film paced as an ensemble.

We may know what happens in the end, but director Reinaldo Marcus Green ensures we at least enjoy the ride. With a runtime of more than two hours, I worried it would wear out its welcome, but it surprisingly flies by. I’m not sure it’s completely worth a trip to the theater, but seeing it with a crowd may help with all of the tennis match scenes. For everyone else, it’s also being released via HBO Max, something that could come in handy in case you need to pause. No matter how you see it, King Richard is a fantastic biopic about the man behind the scenes, and works as a loving tribute to the Williams sisters’ father.