Fast paced and hilarious, it's every bit as fun as you'd expect from Russell & Co. Made for fans of Russell's latest string of hits and those wanting to see Lawrence wake back up after sleepwalking through the 'Hunger Games' finale. 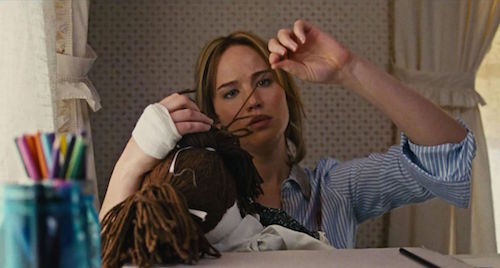 The biopic Joy — chronicling the life of Joy Mangano, inventor of the Wonder Mop — directed by David O. Russell, proves two things: his ability to turn even the most mundane sounding venture into something enormously entertaining and his hot streak shows no signs of stopping. Accidental Love aside, Russell has delivered a stellar lineup after a six year hiatus.

Not discounting his earlier films, the man has just never directed a bad film. Something most directors only dream being said about their career. And Joy only keeps the momentum going after The Fighter, Silver Linings Playbook, and American Hustle with another Oscar-caliber performance from Jennifer Lawrence. Something I was praying we would see after her sleepwalking through The Hunger Games: Mockingjay — Part 2.

Joy (Lawrence) lives at home with her helpless mother Carrie (Virginia Madsen), grandmother Mimi (Diane Ladd), basement-dwelling ex-husband Tony (Édgar Ramírez), and her two kids. She’s barely making ends meet when her father Rudy (Robert De Niro) is given back to him from his current fling of two years, and takes up residence in the basement with the lounge-singing Tony.

Dealing with downsizing at work, Joy is forced to come to grips with the reality that her life is nowhere close to what Mimi told her it would be. One day, Joy decides she’s had enough and sets out to make an invention that will save her family and her sanity: the Miracle Mop. Now, she’s in more debt than ever before after a disastrous turn of events thanks to her half-sister Peggy (Elisabeth Röhm) and must take a stand when a tycoon tries to steal her patent and ruin her forever.

If there’s one emotion that comes to mind watching Russell’s Joy, it’s that of the title. From scene to scene he takes the mundane and finds just the right amount of quirk to make it immediately familiar, but just larger than life to be entertaining. The cast helps in this regard, but that should come as no surprise. It was interesting to think that it appeared as if Amy Adams was Russell’s muse after her turns in The Fighter and American Hustle, but here, it becomes all too clear that it’s really Lawrence.

And just because Bradley Cooper is in the credits, don’t think that Russell is milking their chemistry together again so soon. The two do work wonders together, but they aren’t here to play hookup. The film opens with the disclaimer: “Inspired by stories of daring women. One in particular.” And that’s exactly who Joy is. Strong and independent — at least after the character finally gets deep enough to take action — Lawrence owns the character of Mangano and brings her to life in all her vulnerability as well.

The rest of the cast are having a lot of fun, with De Niro in particular making sure we know that he doesn’t just take paycheck flicks. With the right material and director, the man is every bit as good as he’s always been. Russell keeps the pace chugging along, making the two hour runtime fly by, something that can’t be said for most biopics. With Lawrence giving another one of her Oscar-caliber performances, we’re bound to see her name announced come February, and I bet we get the same thing with Russell. Joy may not be the best film of the year, but it’s definitely one of them. And would we expect anything less from Russell & Company?