Lacks the charm and laughs of the first two films, but is at least better than 'Minions.' Made for die hard Gru/Minions fans. 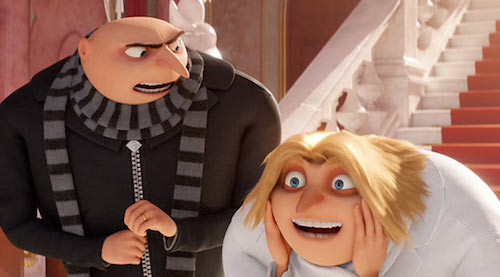 Third time is not always the charm. Toy Story 3 is a pure anomaly. Not even Cars 3 could keep itself from being an exercise in tedium as we very slowly watched the last of the milk run dry. Another failed third entry is Shrek the Third. Thankfully, Illumination Entertainment’s Despicable Me 3 is nowhere near as bad as Shrek 3, but it is much more enjoyable than Cars 3. The best news is that it’s way better than the Minions movie. Faint praise, I know, but at least it holds your interest for a good hour before it delves into boredom.

In what is hopefully the final Despicable chapter, we catch up with Gru (voiced by Steve Carell) and Lucy Wilde (voiced by Kristen Wiig) as they continue fighting crime for the Anti-Villain League (AVL). Together, they foil supervillain Balthazar Bratt’s (voiced by Trey Parker) attempt to steal the world’s largest diamond. But it’s not long before Balthazar manages to snatch it anyway causing Gru and Lucy to get fired from the AVL by the new director Valerie Da Vinci (voiced by Jenny Slate). As fate would have it, Gru finds out that he has a rich, long-lost brother named Dru (also voiced by Carell). Now, Gru finds himself swept up in Dru’s fortune and schemes to become a supervillain, tempting Gru back to his old ways.

There could still be hope for the Despicable Me franchise. It just depends on whether they take the time to craft a worthy sequel. Even Despicable Me 2 was better than the first one. And anything would be better than a Minions 2. That may be why I feel so let down. It thinks it can just coast along on the goodwill of the first two, but Dru is an obnoxious addition and there’s not enough time with Gru’s merry band of adopted daughters — Margo (voiced by Miranda Cosgrove), Edith (voiced by Dana Gaier), and Agnes (voiced by Nev Scharrel).

Not even Wiig is given much to do aside from play second fiddle, along with everyone else, to the Minions characters. While hilarious in small doses, they’re now relegated to punchlines and cheap visual gags. Bottom line, they are for kids only. And I suppose that serves a purpose on its own. But it’s all far too bawdy for adults who like their animated features to have as much brains on screen as it took to animate the ones and zeroes that put them there. All we’re left with is an extra weak entry in what could have been another pretty good trilogy of family films. This one is for the die hard fans only. For the rest of us, it’s been there, seen that. It doesn’t help that The Lego Batman Movie is on home video. I suppose for us, at least, we can opt to stay home and relax and just stay out of their way.