Hard-hitting and surprisingly scientific, it may have been watered down by the powers that be, and still finds time to be both entertaining and even sensitive. Made for will Smith fans and anyone looking to see the latest indictment of the NFL.

Rated PG-13 for thematic material including some disturbing images, and language. 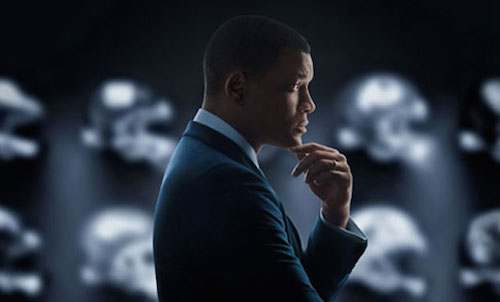 While watching the new football drama Concussion, it made me think, “there’s no way the NFL is going to want people seeing this film.” As it turns out, the NFL had a hand in the final cut and what we get is a surprisingly watered down version of Dr. Bennet Omalu’s discovery of chronic traumatic encephalopathy (CTE) — not that it’s any less powerful. Writer/director Peter Landesman has an Oscar-worthy performance from Will Smith on hand as they team up to bring Omalu’s plight to the big screen. Considering how hard hitting what we see is, I can only imagine how scary CTE really is.

In Pittsburgh 2002, Omalu is working at the Allegheny County Coroner’s Office as a neuropathologist. His unorthodox methods make him beloved by some — namely Dr. Cyril Wecht (Albert Brooks) — while hated by others — fellow pathologist Daniel Sullivan (Mike O’Malley). After retired Pittsburgh Steelers’ Mike Webster (David Morse) — and a string of players including Justin Strzelczyk (Matthew Willig) — start taking their own lives, Omalu sets out to discover why. Using his own money, Omalu discovers CET and wants to let the world know. Of course it’s not without the obvious headbutting of the NFL with everyone from Dave Duerson (Adewale Akinnuoye-Agbaje) and Christopher Jones (Hill Harper) to Commissioner Roger Goodell (Luke Wilson), doing everything they can to try and discredit his findings.

Landesman makes an astounding case for CTE, even with the NFL having their meddling hands in the process. Most of the public will once again shrug off Omalu’s findings, but there’s no doubt going to be a lot of people watching the film and realizing that Omalu is right, and football is in no way shape or form as safe as the league wants fans or parents to believe. Stretching all the way back to childhood sports, there’s going to be more than one set of parents who may stop their child from playing to save them later. The NFL is an almost god-like institution now — something pointed out by Wecht during the film, that they even managed to steal Sunday away.

The cast is phenomenal. Brooks shines as Wecht, delivering some of the most pointed jabs, while Alec Baldwin gets to play doctor alongside Smith as Dr. Julian Bailes. Gugu Mbatha-Raw is a great love interest as Prema Mutiso. Her fantastic chemistry with Smith makes the two a believable couple — even if their story sits on the sidelines of the real one. With Smith already nominated for a Golden Globe, I won’t be surprised if he’s nominated come Oscar time. He wound up on my ballot for the annual Utah Film Critics Association — losing to Leonardo DiCaprio — but Smith emerses himself in the role like never before. This is one of his best performances period. The icing on the cake is that he manages to bring such a powerful performance surrounded by a story that needs to be heard.

I’ve never been a huge fan of football, and it’s very interesting to see a little bit of the seedier side of things. Not that I’m surprised it’s there, that would be ridiculous, but for it to be cast in such a spotlight in a big Hollywood production. Concussion is a surprisingly important film, and I hope the right people see it. Let’s just say that it’ll never be used a recruiting tool, but it’s definitely a fantastic warning for parents who think that their kid somehow needs to play football. Oh, it’s also one of the best pictures of the year to boot. Who knew science could be so thrilling?