A smart script, clever direction, and sexy performances help send February out on a high note. Made for anyone wanting to see Will Smith back in his element and a fun ride to boot.

Rated R for language, some sexual content and brief violence. 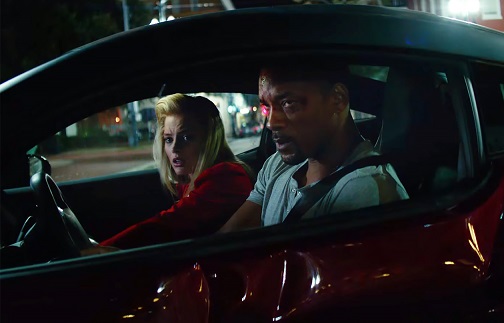 If anyone has a more schizophrenic list of films under their belts, it’s the writing/directing team Glenn Ficarra and John Requa. Getting their foot in the door with the screenplay to the first Cats & Dogs film, they then went on to write the raunchy Bad Santa and Bad News Bears remake. But the duo really came into their own when they took over directing duties and brought us the underrated I Love You Phillip Morris, Crazy, Stupid, Love., and now the Will Smith vehicle Focus. Showing a behind the scenes look at the world of grifters, Ficarra and Requa pit Smith in the dangerous world of easy money.

Nicky (Smith) is enjoying a night out alone when Jess (Margot Robbie) plops down at his table asking him to be her boyfriend to get away from a handsy guy at the bar. The two hit it off and go up to her room where Jess and a partner try to rob him. Calling them out on their con, Jess wants Nicky to show her how she can be better, so he agrees to show her a few tricks of the trade. Eventually, he takes her under his wing and plunges her into his grifting underground full of pickpocketing entrepreneurs.

After they make a big play at a football game, taking over $2 million in cash from gambling addict Liyuan (BD Wong), Nicky leaves Jess on her own, because he doesn’t want their affection to complicate things. Now, three years later, they run into each other in Buenos Aires, where all their feelings come roaring back as Nicky plans on making out with a long con on her new boyfriend, billionaire race car owner Garriga (Rodrigo Santoro). Nicky has to find a way to try to steal not just Garriga’s money, but Jess’s heart again, with Garriga’s bodyguard Owens (Gerald McRaney) being Nicky’s biggest obstacle yet.

For anyone wishing Fifty Shades of Grey had any shred of romance prepare yourself for Focus. This film has sexual tension to spare. To say it bends Fifty Shades over a spanking bench and shows it who’s boss is an understatement. Some may be put off by the age difference between Smith and Robbie, but Robbie holds her own and manages to come off years older than her real age of 24. The two have the on-screen chemistry a film like this deserves as a couple we want to see beat the odds. It helps that Smith is finally back in the kind of role he can play in his sleep: shameless, charming, and even sexy. He’s definitely been finding time to hit the gym for all his lady fans out there.

Ficarra and Requa’s screenplay keeps chugging along, even if the big football scene starts to drag, but thankfully has a hilarious payoff. The same can be said about the whole movie. With as many twists and turns as they throw at us — featuring some amazingly choreographed sleight-of-hand sequences conceived by Apollo Robbins — they never go one twist too far instead of aiming for a huge “gotcha” moment. Something they also managed to pull off in a completely different way in Crazy, Stupid, Love. With February known as one of Hollywood’s dump months, I was a little worried that the directors had lost their touch. But fear not, Focus gets Will Smith’s career back on track — even if temporarily — and it’s nice to see February go out on a high note.