Rated PG for some language and suggestive comments. 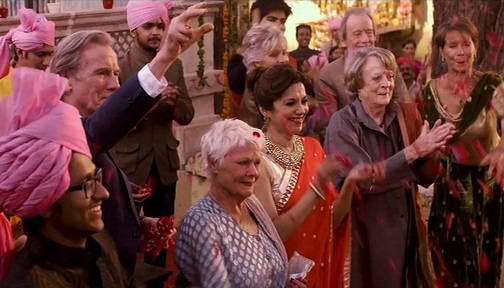 I’m a big fan of John Madden – no, not the football legend, but the director of Shakespeare in Love. His first Exotic Marigold Hotel film was a feel-good indie gem. The seasoned ensemble cast was absolutely delightful, but when I heard that they were making a sequel, I asked, “Why?” Certainly, a follow-up was not expected and not particularly asked for, but when I saw The Second Best Exotic Marigold Hotel for myself, I understood. With the entire cast and crew back, they were able to make a second geriatric India adventure that’s just as charming and delightful as the first.

The Second Best Exotic Marigold Hotel kicks off with an introduction to the blanket story that covers all of the individual character subplots. After several months of success, Sonny (Dev Patel) is ready to expand the hotel. With the help of his new manager, Muriel (Maggie Smith), they’ve gone to the U.S. to seek an investing partner. To complete the business deal, the American partner will be sending an undercover assessor to stay at the hotel and validate their claims of success. The stress of this upcoming surprise visitor, on top of the planning of Sonny and his fiancee’s wedding, is about to throw the entire hotel and its occupants into disarray.

Each of the characters has a sub-plot of his/her own. You may assume that this format could make it feel episodic, cluttered and jumbled, but its screenplay is written in a way that keeps those issues from arising. Instead, you’ll get pulled in by this delightful character-driven drama and enjoy the joyous, fun and comedic ride that it will take you on.

FYI – you will need to know The Best Exotic Marigold Hotel in order to follow and enjoy The Second.