Just because they aren't supposed to be here today, doesn't mean they can't serve up one of the year's funniest, and heartfelt, movies. Made for Smith fans or anyone else who wants to just sit back and laugh. 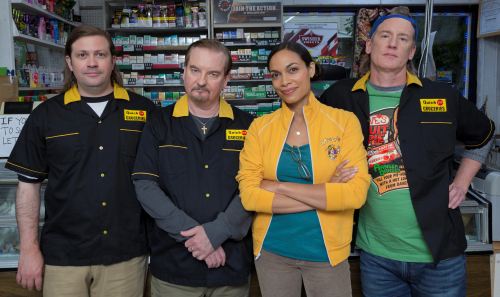 Some directors have a tendency of going back to the well for movie content, but it’s surprising that Kevin Smith has twice now. With Clerks II, Smith wore his heart on his sleeve and wound up making one of his most joyously heartfelt raunch fests ever. When it comes to Smith and his View Askewniverse, Clerks reign supreme. After a heart attack in 2018, Smith threw out his original idea for Clerks III and took the opportunity to be more self indulgent than ever before. And who better to wade these waters than the cantankerous duo of Dante and Randal. With Clerks III, Smith once again delivers the final chapter of our favorite bromance while cranking the meta to 37.

Dante (Brian O’Halloran) and Randal (Jeff Anderson) are still the proud owners of the Quick Stop. Content with bickering over pop culture, while embracing the neverending parade of crazy customers, everything comes to a head when Randal has a heart attack. With Dante doing everything he can to keep his best friend alive — while also grieving over Becky (Rosario Dawson) — Randal decides that since he escaped death’s clutches, he’s going to make a movie about his life. But what Randal needs to realize is that making a movie about his life at the Quick Stop is about more than just his own. Nevertheless, Randal calls upon Dante, Jay (Jason Mewes) and Silent Bob (Smith), and Elias (Trevor Fehrman) to lead the brigade so he can leave his mark.

After receiving heart stents of my own — the first in 2020 and a second in 2021 — Clerks III definitely hit home. Coining a new phrase for my wife to use — “Take your heart pills, Tin Man” — it made the film both funnier and more emotional. While Randal’s heart attack hospital sequence was vastly different from my own experience, it never once downplays the urgency of the situation. While I may have never set out to make a movie — and never would — it definitely makes one take stock of your situation.

Those going into Clerks III know what they’re about to see. Smith makes his own kind of films and why would you bother if you haven’t seen either of the first two anyway? This Clerks paves the way for a finite finish to the Dante and Randal story, but there’s still plenty of laughs and heart tugging along the way. O’Halloran still remains the weakest link — which doesn’t help that most of the heart comes from his scenes. Thankfully, we love Dante which makes it easy to look past. As for Anderson, this outing gives him the opportunity to provide a tour de force. Alongside O’Halloran, they can play these parts in their sleep. I can also attest that they’re two of the nicest people you’ll ever meet.

Smith has always excelled at dialogue and is just as great now as he was 28 years ago. The jokes fly as fast and furious as ever and he more than sticks the landing. While almost everyone returns from both previous films, there’s also some fun new characters to help keep this one moving along. The bottom line is that the film is called Clerks III and you already know whether you were going to see it or not. Thankfully for us, Fathom Events and Lionsgate are giving it a deserved theatrical run through the 25th. I may have watched it at home, but for everyone else, there’s no better place to say goodbye to the franchise than on the big screen in a dark theater with other like minded masses.