Hilarious, charming, and Bollywoodized! Made for fans of the original animated classic, families, and anyone looking for some counter programming as we head into the summer movie season.

Rated PG for some action/peril. 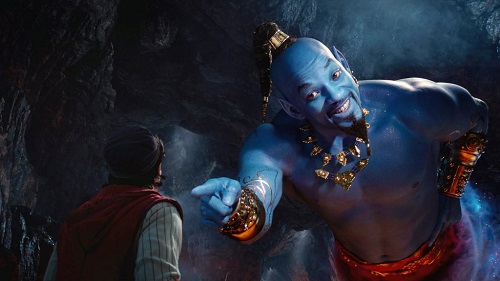 Disney started pillaging their own box office successes in search of fortune and glory a few years ago. Some with greater success than others, and also striking fear for fans worried their favorite Disney classic will become the next unnecessary remake (I’m looking at you Beauty and the Beast and Dumbo although The Jungle Book is still the best).

Trailers be damned, Aladdin winds up being way more fun than expected. Director/co-writer Guy Ritchie may not seem like the best choice for a CGI-heavy Bollywood-infused musical adventure, it’s his very own quirkiness that pulls these elements together. It will never erase our childhood memories of the original classic, but it’s a worthy update overflowing with charm and hilarity.

In this telling, we start with a family sailing the high seas as a Mariner (Will Smith) begins to spin them a tale. The Queen of Agrabah has been killed and the Sultan (David Negahban) keeps Princess Jasmine (Naomi Scott) from venturing out of the castle to protect her from the same fate. Aladdin (Mena Massoud) is still our favorite street rat, wandering the city with Abu when the two meet-cute as expected.

Aladdin and Jasmine find their fates entwined after Jafar (Marwan Kenzari) forces Aladdin to become the diamond in the rough, only to unleash our favorite Genie (Smith). Now, Aladdin must convince Jasmine that he’s the prince she deserves with Jafar hot on his heels with the help of Iago, to prove Aladdin is a con and try to crown himself Sultan.

The first thing you’re going to notice in this version of Aladdin is some of the song changes. The pacing is a little different, a few of the lyrics have been updated, and the music repurposed. With the help of original composer Alan Menken, Benj Pasek and Justin Paul (The Greatest Showman, La La Land) give the songs new life. Bigger, punchier, and as lively as ever, every song is more cinematic. They’ve even written a new song (“Speechless”) that, while fantastic, sticks out like a sore thumb. Thankfully Ritchie keeps it from derailing the film’s momentum.

A lot of people have been complaining about Smith as our favorite Genie. Don’t worry, he’s as charming and hilarious as ever. He never tries to replace Robin Williams’s performance, but manages to make this Genie his own. Massoud makes for a great Aladdin, I just wish they’d given him more opportunity for comedy. The scene where he meets Jasmine as Prince Ali, Massoud kills it.

And then there’s Scott as Jasmine who completely owns the film. This may be called Aladdin, but it’s really the Jasmine show. Scott may come from a Disney Channel background (Lemonade Mouth), but she gets her chance to completely shine now. Full of the Jasmine spirit we know and love, if there’s one thing Aladdin really gets right, it’s in letting Ritchie — and co-writer John August (Go, Big Fish, Frankenweenie) —  add a heaping helping of girl power.

This Aladdin never tries to replace the original, but it’s a great adaptation offering tons of laughs, a few action scenes, and a huge amount of heart.