Hilarious, satirical, meta, and full of heart, Chip 'n Dale are back and better than ever! Made for families looking to share the love with their kids or the now-adult fanbase happy to see their favorite chipmunks back in action. 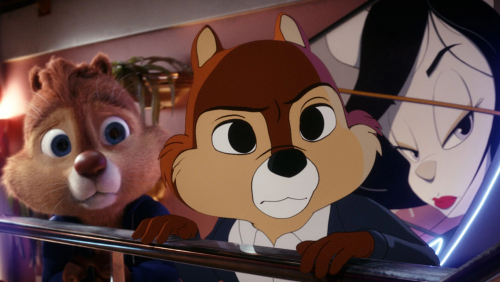 It’s interesting to think that with how beloved and enduring Chip ‘n Dale: Rescue Rangers is, it was only on the air from March 1989 through November 1990. Culminating in 65 episodes — currently being watched by my 4 ½ year old daughter on Disney+ — our favorite chipmunks have been off the air for 32 years. Leave it to Disney to find a way to reboot literally everything, and now we find ourselves treated to the spectacularly nostalgic Chip ‘n Dale: Rescue Rangers movie.

At first you may have asked “why”? There were two aspects that won me over immediately: This Chip ‘n Dale comes from the brilliantly warped minds behind The Lonely Island and The CW’s Crazy Ex-girlfriend. While maintaining a PG-version of both, it’s every bit as whip-smart and hilarious as you’d expect, and has already found itself on repeat in our house. Thankfully, an easy itch to scratch with it being released exclusively on Disney+.

It’s been 32 years since Chip ‘n Dale went off the air, and time has not been great for our heroes. Dale (voiced by Andy Samberg) is doing everything he can to keep his celebrity status, while Chip (voiced by John Mulaney) has gone corporate selling insurance. Chip still holds a grudge for the cancellation of their show thanks to Dale’s side project which wound up never making it past the pilot. But now, the two find themselves back in action when Monterey Jack (voiced by Eric Bana) goes missing, along with a bunch of other toons over the month. The Rescue Rangers find themselves on the case, but could it be their last?

It’s best not to dive too far into the story because that’s where most of the best jokes come from. Satire and nostalgia collide magnificently with writers Dan Gregor and Doug Mand creating an updated version of Who Framed Roger Rabbit. The cartoons exist in the real world now, leading to very real danger. The jokes fly fast and furious — both verbal and visual, along with the best Seth Rogen joke ever. Director Akiva Schaffer keeps the story silly for the most part and never gets too dark or too serious, but still heavy with heart. No IP is left unscathed and the cast are having a blast, clearly loving the characters as much as we do.

Disney was smart to throw this on to their streaming service. I’m not sure it would have completely found its audience in theaters, but there’s just something about watching Chip and Dale back on TV — albeit in a theatrical version — that just feels too perfect. It’s a spectacular way for parents — such as me and my wife — who grew up watching the show to sit back and let our daughter fall in love with the same cast of critters. The setting may have found itself getting an upgrade, but the charm, adventure, and laughs are every bit as abundant. Chip ‘n Dale: Rescue Rangers is as perfect a reboot as you could ever hope for and I can’t wait to see what they do with the franchise from here.