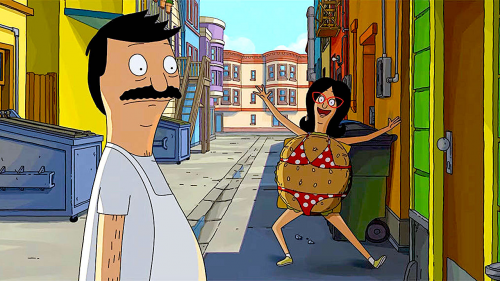 After 12 seasons, 11 years, and 238 episodes of the long-running TV show Bob’s Burgers, I have seen a total of two. The first two. To say I was walking into The Bob’s Burgers Movie blind would be an understatement. But anyone walking into the movie with even the slightest interest will find plenty to laugh at. It’s a good thing Disney, err, Fox, allowed the show’s creators — Loren Bouchard and Bernard Derriman — to co-write and direct, or who knows what kind of misguided concoction audiences could have been served. As it stands, there’s plenty of laughs, heart, mystery, and even songs for everyone to have a good time.

The Belchers — Bob (voiced by H. Jon Benjamin), Linda (voiced by John Roberts), Tina (voiced by Dan Mintz), Gene (voiced by Eugene Mirman), and Louise (voiced by Kristen Schaal) — are hoping to have the best summer ever. The Wonder Wharf is celebrating its 80th anniversary and they’re betting on summer dollars to help them pay their rent. Meanwhile, they’re also trying to secure a loan from the bank, but just wouldn’t you know it, a sinkhole opens up right in front of “Bob’s Burgers.” And a body is found leading to a murder mystery. Now, the Belchers must band together like never before to save their beloved restaurant and solve a whodunnit.

The biggest issue with The Bob’s Burgers Movie is its tendency to overplay certain scenes while simultaneously forgetting to indulge in others. The 102 minute runtime is the length of about four episodes, which is barely too long, there is quite a bit of filler, even if of the hilarious kind. But considering it opens with a big musical number — which also runs too long and becomes less funny as it goes — it seems to forget it’s a musical for most of the movie. There are only three actual songs in the whole thing, which might barely classify it as a musical. What we really have is a murder mystery, and on that note, the film works far better.

The cast all continue to play their parts to hilarious effect and the animation gets a few moments to razzle dazzle with some snazzy CGI enhancements. Jokes and themes are contained within the PG-13 realm, but with the show TV-14, it’s nice to see they never tried cranking up to 11. The family dynamic has a great appeal which helps the elongated runtime move faster than it could have, and the jokes fly fast and furious. Depending on your love of the show will determine whether it was all worth it by the time the credits roll. The Bob’s Burgers Movie knows exactly what it is — a really long episode — and never pretends to be anything more, which honestly just may be the movie’s secret sauce.