While it may have a sense of familiarity due to being a sequel, it still manages to have more heart than most films out right now and features non-stop laughs right through the end credits. Made for ralph fans and anyone wanting to see just how brilliantly Disney is willing to skewer itself.

Rated PG for some action and rude humor. 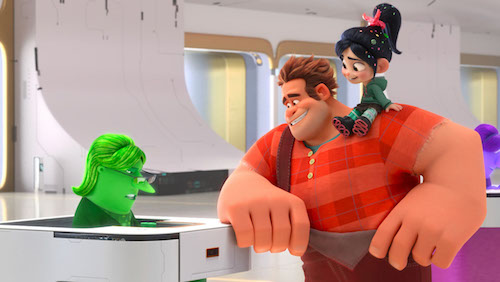 It’s been six years since Wreck-It Ralph (voiced by John C. Reilly) and Vanellope (voiced by Sarah Silverman) saved Sugar Rush from the tyranny of King Candy/Turbo. The two are still best friends, but Vanellope is starting to want more with the predictability of her game causing some growing pains. When Ralph decides to surprise her with a new track, Vanellope goes against the controlling player in the real world, causing the steering wheel to break. Mr. Litwak (voiced by Ed O’Neill) can’t afford to replace the part. Now, Ralph and Vanellope are off to the internet via Litwak’s mysterious new Wifi router, to save Sugar Rush from being unplugged for good.

Director Rich Moore returns — with co-writer Phil Johnston joining as co-director — wringing every last laugh out of internet related jokes, with the same audacity as they did video games in Wreck-It Ralph. No stone goes unturned as they mine everything from Disney’s own monopoly — Marvel, Pixar, The Muppets, Lucasfilm, and themselves, of course — with the Disney Princesses getting the biggest laughs. They steal the film right out from under the big strong man. It’s a brilliant segment and could have made for a short all on its own. It’s also refreshing Ralph’s own insecure masculinity winds up being the villain.

The voice cast return with ample glee, clearly loving their characters. There’s even new characters here to steal the spotlight. Alan Tudyk gets to play polar opposite of King Candy as Knowsmore, the film’s version of Google; Alfred Molina wrings every laugh possible against Reilly as Double Dan; and Bill Hader gets to show a little seedier side as JP Spamley who introduces Ralph to the dark web. Gal Gadot is also great as Shank, the ringleader of the way more violent racing game.

Gorgeously animated, hilariously scripted, and its message of friendship and self esteem carry a different story from Wreck-It Ralph. Ralph Breaks the Internet honestly may fare better in the joke department with parents, but it’s still the perfect holiday treat offering something for everyone as families head out to theaters this weekend. Also be sure to stick through the end credits for two extra payoff scenes.