Depp is nothing short of terrifying, and the rest of the cast is stellar, but the runtime is as bloated as a body sleeping with the fishes. Made for depp fans and true crime/gangster flick fans.

Rated R for brutal violence, language throughout, some sexual references and brief drug use. 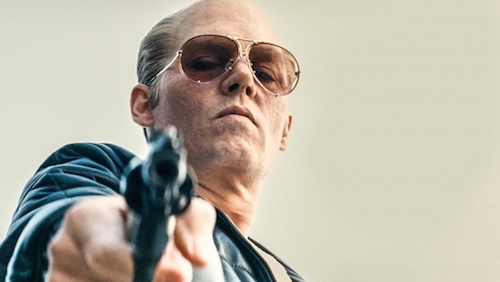 If there’s one studio that does gangster flicks better than Warner Bros, I’d like to see it. Reaching as far back as the 1920s, Warner Bros has made a bloody amount of money with the genre. Their recent Best Picture win with The Departed just goes to show that they love the genre and like to do it right.

When it comes to Black Mass, I was honestly hoping to walk out declaring it “The best film Scorsese didn’t make.” It may not be one of the best gangster films ever made, but it is definitely one of the better ones. Having Johnny Depp give one of his most mesmerizing performances certainly doesn’t hurt the film’s cred either.

Black Mass retells the true story of James ‘Whitey’ Bulger (Depp), a devoted family man with a wicked past. Bulger is the kind of guy that old people are glad to see back on the streets even after a stint in Alcatraz. He’s approached by FBI agent John Connolly (Joel Edgerton) to join forces in taking down the Angiulo gang which Bulger plans to use to his advantage and have the Feds fight their own turf war.

We follow the story from 1975 through to Bulger’s eventual capture in 2011. Over the years, he rises to kingpin  while his personal life falls apart with his son dying from Reye’s syndrome and the eventual death of his mother. Meanwhile, Connolly is doing everything he can to keep his operation afloat with Charles McGuire (Kevin Bacon) and John Morris (David Harbour) breathing down his neck.

There are also subplots involving Bulger’s right-hand men: Kevin Weeks (Jesse Plemons) and Steve Flemmi (Rory Cochrane); and we get an insight into his common law marriage to Lindsey Cyr (Dakota Johnson). Bulger’s younger brother Senator Billy Bulger (Benedict Cumberbatch) also gets plenty of screentime, but the film runs just a tad too long and starts to feel overstuffed. The pacing is also pretty slow, at least it picks up anytime Depp is onscreen.

This is his show, and Black Mass finally gives him another role to really sink his teeth into, proving him to still be one of our finest actors. Bulger is terrifying to say the least and I won’t be surprised to see Depp nominated come Oscar announcements. Director Scott Cooper really needed to weed out some of the more extraneous bits and this could have wound up giving The Departed a run for its money. But screenwriters Mark Mallouk and Jez Butterworth aren’t completely to blame. Their adaptation of Dick Lehr and Gerard O’Neill’s book starts to feel overstuffed, it’s up to the director to trim the fat; in this case he didn’t.

As it stands, Black Mass features one of Depp’s best performances in years, it’s such a shame that he’s being pulled back into his Jack Sparrow/Mad Hatter antics. While he’s always a joy to watch, he’s way more fun when he’s managing to deliver a true performance and not just fall back on schtick. Black Mass may not be a homerun, but it’s a solid triple. It’s a film made for adults and not one person will leave disappointed thanks to Depp. Because let’s face it, that’s the draw here, does anyone even remember Bulger? I suppose someone does, otherwise they wouldn’t have made the film, right? On the flip side, maybe it’s good they did, because now we won’t forget his name.