A horror film that finally has an amazing finale. Don't let the middle fool you, the first, and last, 30 minutes are five star quality. Made for fans of Derrickson's sick twisted visions and horror fans looking for something devilishly old school.

Rated R for violence, bloody images, language and some drug use. 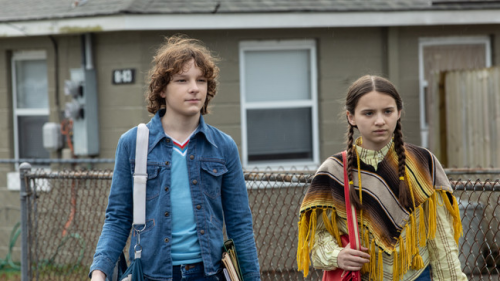 As much as I would love to start reading Joe Hill, I’m perfectly fine watching the film/tv adaptations of his work because they’ve been so successful. Through Locke & Key, Horns, NOS4A2, and now The Black Phone, he has yet to land a dud. While the same can’t be said for director/co-writer Scott Derrickson — possibly the most overrated horror director working today — the two make for a terrific combination here. No offense to Doctor Strange, but The Black Phone is absolutely Derrickson’s best film yet. Reteaming with Ethan Hawke, the two take us on a much scarier descent into madness than the awful Sinister could have ever dreamed.

In North Denver 1978, children are going missing, taken by a mysterious assailant nicknamed, “The Grabber” (Hawke). The only connection is a black windowless van and one black balloon left at the scene. It isn’t long until Finney (Mason Thames) winds up as the latest target, held in a concrete basement with only a toilet, mattress, and the titular black phone hanging on the wall. Soon enough, Finney’s sister, Gwen (Madeleine McGraw), starts having visions about Finney, and other victims of The Grabber. Now, Gwen — and a couple of detectives — are in a race against time before Finny is forced into playing a game of “Naughty Boy” and winds up dead.

If there’s one thing holding The Black Phone back from a perfect score, it’s being about 10 minutes too long, and the odd casting of Jeremy Davies as Finney and Gwen’s abusive alcoholic father. It’s a good thing the film ends the way it does, because Davies is just too likable an actor for this kind of role. Hawke gives a terrifying presence as The Grabber, while the Thames/McGraw duo absolutely kill it as siblings. McGraw in particular is outstanding.
As for the runtime, the film starts to drag a little through the middle, but picks up considerably in the last third. The final 30 minutes hold you in its grips and don’t let go until the credits roll. It may not be a perfect film, so few are, especially in the horror genre, but Derrickson — along with frequent co-writer C. Robert Cargill — and his cast give everything they have, setting the bar mighty high for this year’s scary movies.