May not live up to its lofty allegorical aspirations, but more than makes up for it with some great jump scares, super creepy atmosphere, and practical effects. Made for horror fans yearning for more than the usual slice-and-dice affairs.

Rated R for violence including gruesome images, and for language. 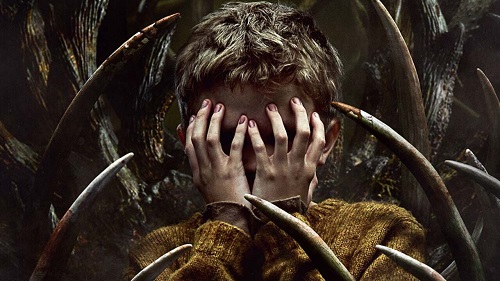 Considering wendigo folklore has been around a long time, it’s surprising co-writer/director Scott Cooper’s Antlers is the first mainstream film about it. While there may be smaller-budget films based on wendigo, try naming one that was released in theaters by a major studio. I’m sure having producer Guillermo del Toro attached helped, but it all goes back to a pitch and a script to get films greenlit and Cooper — along with co-writers Henry Chaisson and Nick Antosca (also story credit) — has given it a surprisingly proper due. The title may confuse some before heading in, but make no bones about it, Antlers is the scariest film in theaters and perfectly released this Halloween weekend.

Julia Meadows (Keri Russell) has come home to Oregon, to live with her brother Paul (Jesse Plemons), after an incident in California. With Paul as Sheriff, he’s pulled into more than he bargained for as Julia becomes increasingly concerned for one of her students, Lucas (Jeremy T. Thomas). Lucas starts looking more malnourished by the day, and has been drawing some disturbing artwork, after the disappearance of his father, Frank (Scott Haze), and younger brother, Aiden (Sawyer Jones). What Julia doesn’t know is Frank was attacked by a creature and Lucas has him and Aiden locked up in the attic to keep themselves safe. But after a few townsfolk go missing, Julia and Paul set out to find out what’s happening, much to the chagrin of former-Sheriff Warren Stokes (Graham Greene) who warns a wendigo may be on the prowl in their sleepy little town.

If there’s one easy way for any horror movie to win me over, it’s with some good ol’ practical effects. With an overreliance on CGI that’s seeped its way into every aspect of horror — even blood splatter — Cooper has gone all out in Antlers. The finale would never work if it wasn’t for a performer covered in prosthetics. It also helps enhance the performances of Jones and Haze as the poor father/son are stuck in one of the most horrific circumstances possible. The rest of the cast are fantastic as well. Plemons may be playing yet another Sheriff role, but he plays off Russell well, even if she’s still pretty wooden up until the last few scenes.

As scary as a killer in a mask may be, films based on urban legend/mythology are far more frightening. The mystery around the unknown makes for far better jump scares — there are a few well-placed moments in Antlers — and amplifies the creepiness. Halloween is the perfect landing for a film like  Antlers and it’s playing exclusively in theaters. I may not have seen Halloween Kills, but I did watch the “Honest Trailer,” and I can guarantee, while it may be fun to watch Michael Myers slash his way through the morons of Haddonfield, it’s far scarier when there could be a hidden menace lurking just out of sight, waiting to pounce.