Never knows which side it wants to be on, horribly timed, and features some of Willis's worst acting yet. Made for die hard Bruno fans and right-wing gun nuts.

Rated R for strong bloody violence, and language throughout. 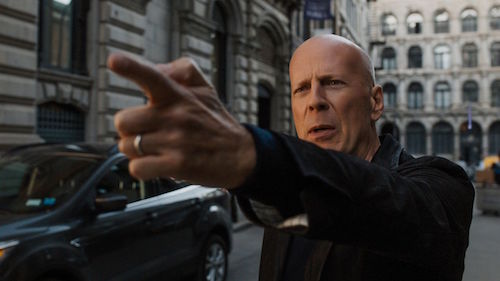 Eli Roth has never been become synonymous with revenge thrillers. After marking his territory in the horror genre with Cabin Fever and the first two Hostels, Roth may be more well known as Quentin Tarantino’s Inglourious Basterd, “The Bear Jew.” He went back to the drawing board with the horror/comedy The Green Inferno, but then shifted away with 2015’s Sundance entry, and remake, Knock Knock.. With Death Wish, yet another remake, Roth continues with the revenge thriller genre — and not in a good way. Death Wish has no idea what message it wants to say, and Roth decides to give it the kitchen sink approach instead.

For Dr. Paul Kersey (Bruce Willis), he’s got it all with a loving wife and daughter — Lucy (Elisabeth Shue) and Jordan (Camila Morrone) — and according to his brother Frank (Vincent D’Onofrio) he’s the one with all the money. Unfortunately, Frank tells this to the wrong valet and sure enough, robbers come calling. Paul isn’t home during the robbery which finds Lucy shot dead and Jordan in a coma, so now he’s dealing with the dead-end investigation by Detectives Rains (Dean Norris) and Jackson (Kimberly Elise). Now, Paul decides to take matters into his own hands, teach himself how to handle a gun via YouTube, and get revenge on the thugs who ruined his life.

In light of the Stoneman Douglas High School shootings, the most vulgar aspect of Death Wish is that the release date wasn’t bumped back. As cringeworthy as the dialogue may be, as bad as some of the acting may be, and as boneheaded as the directing may be, I can’t help but wonder if the NRA paid MGM to go ahead and release it. There’s also some painfully obvious reshoots, along with the film’s wishy washy handling of gun rights. Is Roth anti-gun, pro-gun, spoofing guns?

Death Wish tries to push the envelope as a ’90s wannabe thriller and falls apart on every level.