October is here! Where did September go? Well, this is the
month for horror films so we here at The Reel Place would like to give you a
good helping of horror films to get you through the month. Our 13 Days of
Horror will run the gamut of horror legends, to guilty pleasures we like to
stick in every year. 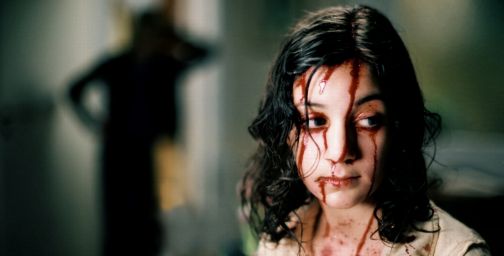 I had a hard time picking the exact movie I wanted to start
this feature out with. There’s so many good, fun horror films out there that
can fill your time as you wait for Halloween to approach. After a good deal of
deliberation, I don’t think I’m ready to leave the Let the Right One In debate
die. Let the Right One In was just remade by director Matt Reeves into an
American version called Let Me In. As evidenced in my review, I thought while
the movie was well made, it still took too much from the original. So much so
that there wasn’t much suspense building. If you’ve seen the original you can
see everything coming before it happens.

Fresh off Let Me In being released in theaters I want to
revisit the Swedish original, which is based off of a novel. When I saw Let the
Right One In, I said to myself, finally a movie about vampires that shows us
exactly how much it really sucks (pun intended) to be a vampire. It’s a dirty
life, filled with regret, misery, and endless hunger pangs.

Let the Right One In, is a slowly paced, film about a
bullied boy who would like nothing more than to get back at his attackers. He
meets a young girl who he later finds out is a vampire. She has a caretaker of
sorts that goes out and “gathers”meals for her if you catch my drift. Instead
of flashy, in your face scares, Let the Right One In plays out almost like a
melodrama. It’s sweet and touching, but at times downright brutal. It’s creepy,
but satisfying if you’re looking for a horror movie that will not so much jump
out and scare you as it will make you feel uneasy and unsettled.

Since you’re bound to watch quite a few slasher flicks over
the course of the weeks leading up to Halloween, why don’t you sit down with
this foreign horror film and get creeped out in a different way?