The director of 'Lights Out' and the writer of the first 'Annabelle' completely redeem themselves with the year's scariest film so far! Made for fans of James Wan's brand of old school horror. 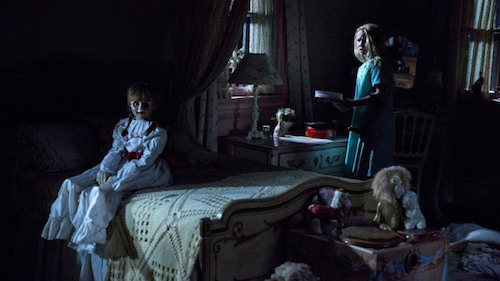 A few issues were working against Annabelle: Creation. Mostly, that the first movie was not that great. While the first Annabelle had a few moments that helped it find a place as a Conjuring spin-off, it was nowhere near on par with either of the Conjurings. Then there’s director David F. Sandberg — whose own Lights Out was one of the worst films of last year — and screenwriter Gary Dauberman returning from the first Annabelle. But something funny happened on Annabelle’s return to the big screen: they got everything right and Creation is the scariest film of the year so far!

Traveling even further back in time (1957), Samuel Mullins (Anthony LaPaglia) is a doll maker who has just finished creating the first ever Annabelle doll. Life is good for the Mullins — including his wife Esther (Miranda Otto) and daughter Bee (Samara Lee), but not before Bee is run over by a car and killed. Twelve years later, the Mullins have turned their home into an orphanage. Along comes a busload of children and teens — most importantly Linda (Lulu Wilson) and Janice (Talitha Bateman) who has a bum leg thanks to polio — brought by Sister Charlotte (Stephanie Sigman) who just wants the girls to have some kind of normalcy. But just wouldn’t you know it, a locked door holds dark secrets and soon enough, demons, possession, and terror abound.

Sandberg instantly seems to be paying homage to Guillermo del Toro’s Devil’s Backbone putting the Mullins’ home in the middle of a deserted countryside full of evil spirits. It also shares the honor of being every bit as terrifying, if not more so. You’d be hardpressed to find a bigger fright machine that Annabelle: Creation, and can proudly wear the moniker until Pennywise returns next month in It (which Dauberman also co-wrote only making me even more excited for it). Until then, Creation is full of terrifying visuals and scare sequences that don’t simply rely on jump scares. Sandberg and Dauberman make sure to squeeze every ounce of mayhem possible out of every situation. Where most films would cut away after something horrific happens, the camera never moves and we get to watch the horrific sequence continue. Scarecrows, crawl spaces, chair lifts, even a crucifix, are all used to maximum effort.

It helps having such a game cast to put through the wringer. While Wilson is no stranger to the genre — a standout against the older cast in the other superior prequel Ouija: Origin of Evil — Bateman manages to steal the show away from everyone. She gives Janice an arc most horror characters could only dream of. To put it bluntly, Sandberg and Dauberman have outdone their previous efforts and are completely forgiven for their past discretions. The Conjuring finally has a usurper, yes, Creation is even scarier than that first film that kicked off the whole Ed and Lorraine Warren Universe. But if they keep making them even halfway as scary as Creation is — next up is The Nun (Dauberman again) — then Warner Bros. certainly has their own horror multiverse full of carefully crafted monsters the likes of which Universal can only envy. Annabelle: Creation is the best and scariest horror film of the year, now that’s something for horror fans to scream about.